Yup, still doing mini-blogging on Facebook/CarolMoore1776 and tweets at Twitter/CarolMoore1776  Leaving the occasional reader HERE to think I've disappeared?  Glad to see some NEWER posts have gained lots of eyes.

Well, below are a few of the highlights of post-April 15 2018 Facebook posts and Tweets. And a second post with a few of my better memes. But first, a story I find amusing, based on my own experience of sexist abuse by one of Bernie's Boys! (At least Bernie has come out in support of the free speech rights of those advocating or boycotting Israel because of its abuse of human rights of Palestinians. He opposes the proposed federal law that would limit American's rights.) 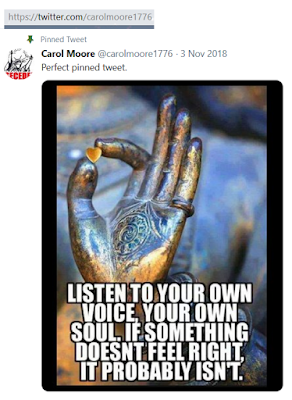 Posted by CarolMooreReport at 8:33 PM