Speaking of GAS ATTACKS on Women and Children 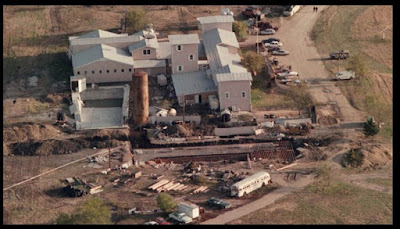 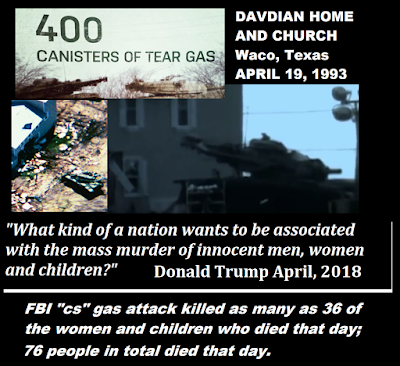 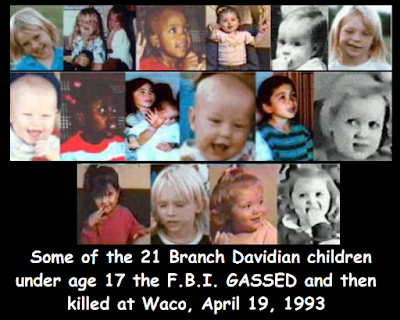 Tanks smash into building putting dangerous CS gas inside with pyrotechnic (fire-making) artillery rounds until the building catches fire and burns, killing most of the trapped inhabitants. 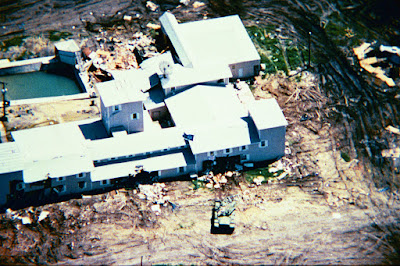 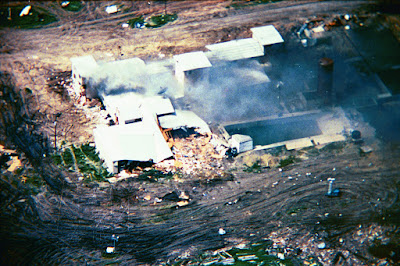 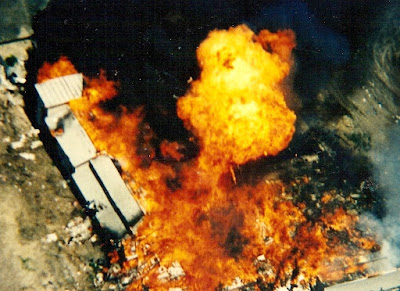 Update 4/18/19: Austin American-Statesman ran a 25th anniversary story featuring yours truly plus other Waco experts. The title is far less sympathetic than the article itself. A quarter-century later, `dark theories’ still hover over Waco siege by Jonathan Tilove - American-Statesman Staff - April 14, 2018. Excerpt... read whole article quick before the paywall shuts you down; a number of NEW exposes!  And in comments, don't miss any snarky vitriol from Hillary&BernieBros and other authoritarians...
....
Lexington, Concord and Waco

On April 19, 1993, Carol Moore — a feminist, pacifist, libertarian writer and activist from Washington, D.C. — was planning on celebrating the 217th anniversary of the Battle of Lexington and Concord. Moore is the great-great-great-great-granddaughter of Col. James Barrett, the commander of the militia at Concord. She had been following the Waco standoff and after watching CNN’s live coverage of the fire, she closed herself in a storage room and wept.

“What a way to celebrate Lexington and Concord — burn to death individuals also accused of owning too many weapons,” Moore wrote in the preface to her 1995 book, “The Davidian Massacre: Disturbing Questions About Waco Which Must Be Answered,” which was published by the Gun Owners Foundation and offered a comprehensive examination of the controversies in Waco’s wake.

After seeing “Waco: The Big Lie,” Moore traveled to Mount Carmel during a visit to Texas and met some surviving Branch Davidian women.

“Writing this book has been an angering experience, as I have continued to find more and more evidence of federal crimes and cover-up of those crimes,” Moore wrote in the preface. “My research and experience have convinced me that the federal government, with full cooperation of the media and the press, destroyed a loving, committed, interracial community and family, something all too rare in our isolated, alienated, bigoted world.”

Asked by the American-Statesman to evaluate the various Waco conspiracies and cover-up theories 25 years later, Moore began by defining a conspiracy theory as a belief that “an event or phenomenon occurs as a result of a conspiracy between interested parties; a belief that some covert but influential agency (typically political in motivation and oppressive in intent) is responsible for an unexplained event.”

“This includes not only the ‘grand plan’ but every little action, incident and coverup that advances that plan,” she said.

For Waco, Moore said, “the overarching conspiracy theory held in various permutations by most critics of the government is that an ‘out of control’ federal agency with budgetary needs decided to put on a big military-type show bringing several local agencies together. They needed a big target and the Davidians were it, so they listened to the Davidians’ enemies, dug up all the dirt they could, ignored the Davidians’ (legal) gun business and previous cooperation with law enforcement, and went in with the attitude they were at war against a domestic armed force of de facto terrorists.” ....

First, my apologies to the author for not specifying in notes that my definition of conspiracy theory came from the Oxford English Dictionary via Wikipedia.

Second, the author only mentioned the first half of the "overarching conspiracy" I've described.  The second half is that as a result of attacking the Davidians - as if in a "war against a domestic armed force of de facto terrorists” - on February 28, 1993 BATF agents ended up shooting at the unarmed Koresh and his father-in-law at the front door.  They shot indiscriminately into the building, as well as allegedly from helicopters, all of which were and are illegal. The front doors, roof and walls of the building contained evidence of the shooting from the ground and the sky, as seen in photographs and by the Davidian attorneys who eventually went into the building.

ATF agents could have been prosecuted for murder for their indiscriminate gun fire, as even then-BATF director Stephen Higgins later admitted. Also, agents' actions gave Davidians a "self-defense right" at trial under the federal Firearm Owners' Protection Act of 1986 to shoot at law enforcement. (And in fact at trial Davidians were found innocent of the most serious charges on self-defense grounds.)

Therefore the “cops” - ATF and FBI - had to do a coverup, destroy the evidence and discredit, and even kill, the witnesses. FBI and Justice Department officials turned a blind eye while FBI agents in Waco sabotaged negotiations with Davidians in order to give the FBI an excuse to destroy evidence. Then agents lied to Reno to get her to approve their plan.  On April 19, 1993 agents went in with tanks and CS gas delivered by military-issue pyrotechnic (i.e., fire producing) projectiles. Thus they "accidentally" started one or more fires.  Whether or not a few religious fanatics in the group started more fires after that is almost immaterial at that point.

Because there are so many little coverups involved in the whole "Waco Massacre" it can be easy to lose track of the fact that this was a really big cop crime/cop coverup.

Posted by CarolMooreReport at 3:53 PM