Why the psychiatrist went crazy... 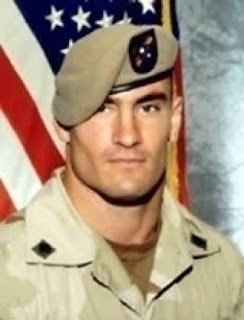 Besides being a Muslim who got ticked off for being insulted about being a Muslim in the military, what else could have driven military psychiatrist Nidal Malik Hasan crazy enough to join those who immorally use terror to protest oppression? (Unless he was dumb enough to think terror is an effective method of proselytizing?)

Anyway, Kevin Tillman is the brother of football player turned American soldier Pat Tillman (above) who was killed by friendly fire in Afghanistan - which the military covered up for 5 weeks. He was shot 3 times in the head! In 2006 Kevin listed some reasons even Christian and Jewish and Americans of all religions are disgusted with the U.S. government - and most of them still apply to President Obama...

Somehow the more soldiers that die, the more legitimate the illegal invasion becomes.

Somehow American leadership, whose only credit is lying to its people and illegally invading a nation, has been allowed to steal the courage, virtue and honor of its soldiers on the ground.

Somehow profiting from tragedy and horror is tolerated.

Somehow the death of tens, if not hundreds, of thousands of people is tolerated.

Somehow subversion of the Bill of Rights and The Constitution is tolerated.

Somehow suspension of Habeas Corpus is supposed to keep this country safe.

Somehow reason is being discarded for faith, dogma, and nonsense.

Somehow a narrative is more important than reality.

Somehow the most reasonable, trusted and respected country in the world has become one of the most irrational, belligerent, feared, and distrusted countries in the world.

Somehow being politically informed, diligent, and skeptical has been replaced by apathy through active ignorance.

Somehow the same incompetent, narcissistic, virtueless, vacuous, malicious criminals are still in charge of this country.

Somehow this is tolerated.

Somehow nobody is accountable for this.

Update: Washington Post writes: "The Army psychiatrist believed to have killed 13 people at Fort Hood warned a roomful of senior Army physicians a year and a half ago that to avoid 'adverse events,' the military should allow Muslim soldiers to be released as conscientious objectors instead of fighting in wars against other Muslims."

Posted by CarolMooreReport at 10:10 AM