As long as I have blogger open, might as well share something a woman wrote and I commented on. The "violence to prove manhood" theme and truth is something I've been promoting for last 17 years especially.

From a libertarian viewpoint, of course, access can be restricted by gun sellers voluntarily NOT selling to people who they believe are mentally disturbed. And companies not engaging in profiting off selling weapons to terrorist groups and evil governments all over the world. And people voluntarily giving up guns to private associations that will destroy them. Obviously having a bunch of macho jackbooted thugs raiding homes to take guns is as bad as macho jackbooted thugs raiding homes and clinics to stop abortions.

The other thing is to secede into communities of likeminded people who don't want guns - except for the police who keep out gun owners, of course. Just hope they don't become tyrants 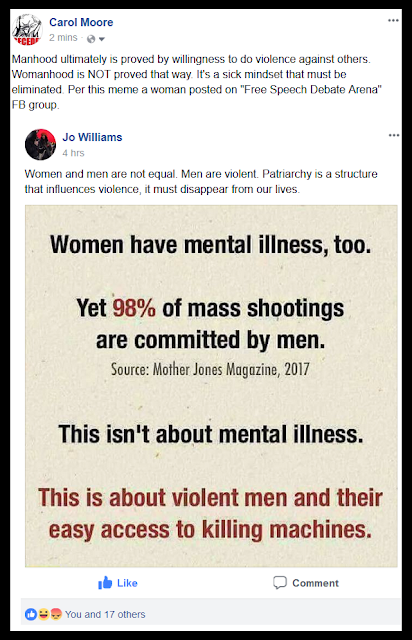 Posted by CarolMooreReport at 2:07 PM