Because of all the sexist harassment at Wikipedia when I was editing it, I never did finish and put up my article on the phrase "Libertarian Decentralism", it's history, different meanings and, IMHO, its best, most libertarian meaning.  I will be finishing it soon for re-vamped Secession.net and one or more other Wikis.  I'll be particularly motivated now because of the perversion of the idea recently promoted by Mises Institute president Jeff Deist.

During my days editing Wikipedia I had the misfortune to have to deal with a couple of haters of libertarians who wrote highly biased and exaggerated stories about  a number of libertarians, especially those connected with the Mises Institute.  Their assertions usually were exaggerated and rarely were supported by the sometimes questionable sources they provided.  Of course, I heard enough about the Ron Paul newsletters over the years and certainly opined enough that they should out the idiot who wrote the most obnoxious entries and do mea culpa for publishing his screeds. But I had gotten the impression they'd reformed any such rank stupidity.

Ron Paul, Lew Rockwell and Murray Rothbard, among others, have been a lot more culturally conservative than I am, and more interested in appealing to the right. As a former liberal Democrat I'm more interested in reaching out to independents and liberals -- and making sure those strays from the GOP know that women will fight for reproductive rights!  The Mises group also are annoyingly obsessed with the states rights of the confederate states and bashing unionist Abraham Lincoln. Since I emphasize individual rights today, I don't spend too much time thinking about states rights issues of 156 years ago!

However, in the last couple years some libertarians have over-reacted with increasingly vicious rhetoric to growing big government encroachment on religion and individual rights and oppressive political correctness on campus.  Especially annoying to all has been the enforcement of the latter by vicious black bloc/Antifa street violence suppressing speech. Violence begets violence. I had seen some wack jobs making joke memes online about throwing leftists and leading libertarians out of helicopters. But I didn't realize how bad it had become on an intellectual level until I heard about Jeff Deist's speech a few days after he gave it in July 2017.

Here's my Facebook statement which I spammed to all sorts of libertarian groups.  Its goal is to raise consciousness, not to destroy people, like so many "liberal", "progressives", leftists, etc. try to do today.  Of course, my memes may be more examples of tough love than consciousness raising. Nobody's perfect!

Carol Moore comment on Jeff Deist presentation “For a New Libertarian” which he delivered at the 2017 Mises University.

As a long-time libertarian decentralist promoting subsidiarity, nullification, self-determination and secession by communities of common interest, someone who actually worked with Murray Rothbard in the 1979-82 era, I was disappointed by Jeff Deist's sloppy and off-target presentation relevant to the topic. He doesn't seem to understand the difference between the right to be parochial in your self-determining community vs. some deluded view you have to be parochial to create a libertarian society!

Sure, most humans retain what Deist calls their “stubborn ideas about family and tribe”, about “religion and faith”, “ethnic or nationalist or cultural alliances” and even their “sexual hangups and bourgeois values.” However, what matters to libertarians is that despite these attributes, humans adhere to the non-aggression principle, the Golden Rule advanced in similar language by most religious and many philosophical views. Libertarians do not see being (again Deist) “fragile and fallible and hierarchical and irrational and suspicious and herd-like” as being an impediment to understanding that principle. What hope is there of voluntary solutions and a true civic society among fallible humans without the Golden Rule?
Deist' assertion there is some great number of libertarians “appearing hostile to family, to religion, to tradition, to culture, and to civic or social institution” (civic society) seems like a straw man. Sure, there are some, but Deist does not bother to name or quote even one.
I feel like the real target of Mr. Deist’ wrath is women. After all, billions of women worldwide are rejecting the deep set “traditions” and “institutions” of “patriarchy”, otherwise known as male rule and female subservience; male competition for recognition and power, without the humiliation of being bested by women; male resort to violence to prove their manhood, without females carping about “domestic violence” and “toxic masculinity.” Most enraging to some men is women asserting they can control their own bodies and abort any fetus they find inconvenient, without even bothering to consult their all-powerful fathers or husbands. (Abortion actually is a 10,000 year old tradition among women.)
Deep familial loyalties certainly are a defense against the state, but “blood” is not the only criteria that defines family, or we would have intermarried ourselves to extinction long ago. I agree that “government wants us atomized, lonely, broke, vulnerable, dependent, and disconnected”. However, the degree to which anti-family results are intended or unintended consequences of government policies, and whether some of those policies and programs would exist in a free market anyway, is worth debating.
The truth about the breakup of American families is that 70 percent or more of divorces are initiated by women. Why? Could it be they are fed up with males who just can’t give up their old traditions of expecting women to follow their orders? Who expect them to suffer in silence when they learn husbands are having affairs or sexually abusing their children?
Mr. Deist writes: "... assuming roughly 10% of the US population is reasonably liberty-minded, we’re talking about 32M people. Imagine if each of them had 3 kids, we’d create an army of 100M people!" Attention Jeff: Men don't have babies. So you want each libertarian oriented woman to have SIX kids each?  Or probably at least 8, since there are fewer libertarian women than men. Surprise, Mr. Deist! Few libertarian women are interested in becoming brood mares so that alleged libertarian males can create an army of 100 million people!!
However, there are lots of single mothers who would love to form “single moms” communes and communities to help each other bring up children who have been abused, neglected or abandoned by their fathers. Of course, creating such communities is illegal under most zoning regulations, something all libertarians should decry.
Nevertheless the family will survive and many families will create relatively conservative communities to protect kids from perverse outside influences. But in a society based on private property, not state territories and laws, these residential communities still will have all sorts of non-parent approved alternatives within a few miles distance. Ones that already may spied upon by a 12 year old’s toy drone.
As for religion, conservative Christian religion has been forced on people by the state for at least 1700 years. Judaism, Islam and Hinduism, among others, all have enforced religion through the state. The freedom from state-enforced religion which libertarians seek means freedom to start new religions, shades of the 1960s when psychedelic drugs led to religious inspiration, before they were crushed as being immoral by the Christian state’s war on drugs.
I certainly hope humans will evolve religions based on the libertarian metaphysics of free will, and thus principles akin to consciousness, being inherent in reality. And all true libertarians believe that the libertarian nonaggression “golden rule” must be the basis for governmental as well as private morality. But Mr. Deist evidently falls back on the old patriarchal religious and even nationalist myths which most libertarians realize encourage centralization and authority. 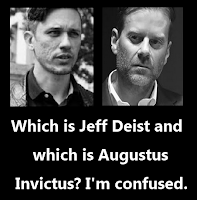 Mr. Deist ends with a call for libertarians to decide “what would you physically fight for” and base their strategy on his assertion that “blood and soil and God and nation still matter to people.” The national socialist sloganeering aside, this seems to be little more than an appeal to pre-libertarian macho emotions over rational thought, certainly nothing new or libertarian. And certainly nothing that would convince his preferred audience of the case for libertarian ethics, subsidiarity, nullification, self-determination and secession by communities of interest.
END Facebook post

DANG!! I can see now I have to do a separate article debunking in greater detail the political argument that only "ethno-centric" nationalism can be the basis of liberty.  For any libertarian who isn't convinced by my authoritative assertion!   Per this meme. 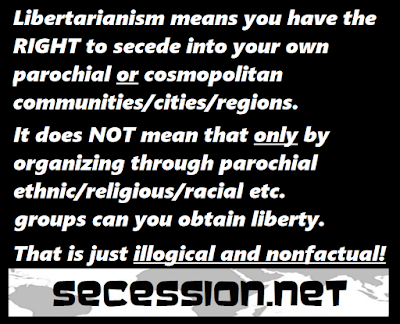 A number of people note that Mises himself had been driven out of ethno-centrist Germany and was a strong anti-fascist.  I passed around this quote I found about his being against "breeding" programs, which Deist defacto proposes.

While I don't expect Deist (or Tom Woods who has most energetically defended his more extreme statements) to back down entirely, even when attacked by high profile libertarians. Deist did issue this meme soon after, perhaps as a tacit admittance that MAYBE he went too far.  We'll be watching and nitpicking you, Jeff! 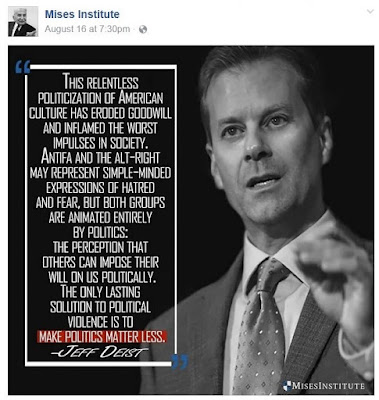 There's more discussion of all this in various publications and a series of excellent articles in Reason.org.  See "Tribalism and Economic Nationalism Are Cut from the Same Cloth", "Is There Really an 'Insidious Libertarian-To-Alt-Right Pipeline'?", "Heather Heyer, Charlottesville, and the Awful Trajectory of Political Violence", and "Let's Give Out Genetic Testing Kits at the Next Neo-Nazi Rally".


Meanwhile, I've been meme-ing away some more... The first one is self-explanatory with the gray scale guys having called selves libertarian. (Deist is in the middle.) The second is one more variation on the meme photo I've used in this series of posts. My favorite says: "Kiss and make up." 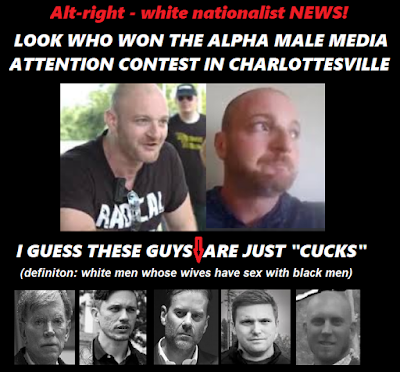 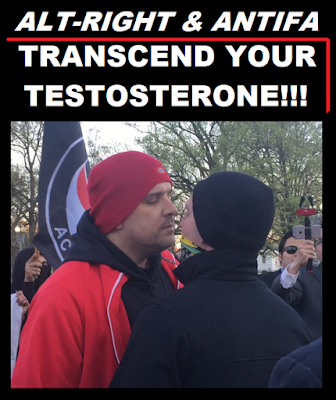 Augustus Invictus and Ryan Ramsey, who still afflicts frustrated libertarians in the Florida party, call themselves "revolutionary conservatives." They both are into their "manhood."  Among other statements and actions, this is clear from Invictus statement written with Richard Spencer. And Ryan brags about making his (white) babies to keep (the white race) safe from "EXTINCTION!"   The title is a play on the "MUH ROADS" joke libertarians make in response to the inevitable question "Who will build the roads?" 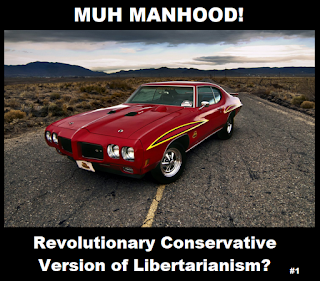 Finally, a couple of "pox on both their houses" memes, one from the web, the bottom my own... 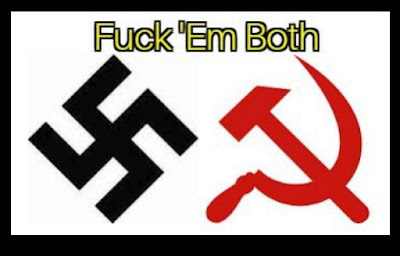 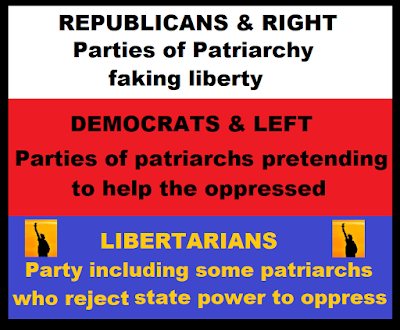 Posted by CarolMooreReport at 5:03 PM