So, a little dirt on Bernie Sanders...

Obviously as a libertarian, I can’t support a HUUUGE statist like Bernie Sanders.  I like to think he IS the least likely of the Demopublicans to get us into a nuclear war, which is my biggest issue. But I’d trust the libertarian or green party candidates far more on that issue.  Let's face it, Sanders' anti-freedom socialist protectionist corporate statist policies would destroy the economy, probably leading to a really big warmonger being elected in 2020. (The current Republican crew already wants to first strike North Korea and/or send Japan after them! Make the Middle East sands glow. Take on Russia and China militarily....etc.  Oi, I'm heading for my bomb shelter in the hills if they win!)
My little dirt on Sanders is my one run in with him in spring of 1999 when for three months Bill Clinton was bombing the heck out of Serbia. Supposedly it was because of Serbia's mass murder of Muslim Kosovars, which proved to be an exaggerated charge. (Just like Hillary Clinton’s exaggerated charges against Muammar Gaddafi in Libya. At least Bernie was “wary” of that war.)

One would like to think Bernie has gotten smarter. After all, the real goal of bombing Serbia was to prove that the United States would be the ones drawing boundaries in Europe, even in countries friendly to Russia.  During the bombing some in the military were calling for sending ground troops in, which Russia warned could trigger nuclear war.  Clinton did not do so.  Bernie at least is "wary" of the United States continuing to expand NATO and poke the Russian bear.

Anyway, one day during the bombing I joined an organized group of peaceniks lobbying against the war, going office to office in the US House of Representatives.  We were received politely in all the offices and with greater enthusiasm by an aide in the office of our D.C. representative who was against the war.  And then we walked into Bernie Sanders office - and all hell broke lose.  He was really mad at us for daring to complain about his vote, yelled at us and practically kicked us out of his office. Ever since I’ve thought he was a real ass, to be kind.

I don’t remember off hand if we went to his office before or after he had Vermont protesters arrested at his Vermont office or before or after one of his staff members quit because of his stand on the war.  Here are excerpts from a relevant press release and personal letter.

[Burlington, VT] I am writing on behalf of the anarcho-socialist-feminist and anti-racist left in Vermont, some 25 of whom are sitting next to me in this occupation. We are in Bernie's Sander's office to help bring a halt to the escalating war in Yugoslavia and the ongoing war against Iraq, both supported by Sanders....Bernie became an imperialist to get elected in 1990.... The Vermont Democratic Party leadership has allowed no authorized candidate to run against Bernie in 1990 (or since) and in return, Bernie has repeatedly blocked third party building...Sanders continues to support sanctions even though the Iraqi body count has now passed 1.5 million. Just as he has supported every bombing of Iraq since 1992. When Clinton sent military units to Kuwait and Saudi Arabia in October, 1994 because Iraq moved troops inside Iraq closer to the Kuwait border (apparently about 100 miles away), Bernie supported this because "we cannot tolerate aggression."...Among his other discredits, Sanders supported the Federal Crime Bill that give the gave the capitalist state more than 50 new pretexts to execute members of the working class--because those without capital get the punishment. He did this while courting the Vermont Police Chief's Assn....On a related issue, Bernie was recently asked by the local press why he was the only member of Vermont' s three member Congressional delegation who had no person of color on his staff. Bernie responded that "we're hiring the most qualified people we can." ...At 6:30 PM, one half hour after closing time, Philip Fiermonte of Bernie's staff had 15 of us arrested for trespass. Sanders refused a conference call with those in the occupation, which was carried out nonviolently and with no disruption to his staff.

Sanders' staff policy analyst Jeremy Brecher wrote a letter of resignation to Sanders over the bombing of Serbia soon after. It was widely circulated among peace groups at the time. It said in part: 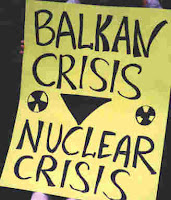 On 4/27/99 I presented you with a memo laying out an alternative approach to current Administration policy. It stated, "The immediate goal of U.S. policy should be a cease-fire which halts Serb attacks on Kosovo Albanians in exchange for a halt in NATO bombing.... The House Resolution (S Con Res 21) of 4/29/99 which "authorizes the president of the United States to conduct military air operations and  missile strikes in cooperation with the United States' NATO allies against  the Federal Republic of Yugoslavia" supports not only the current air war but also its unlimited escalation. It thereby authorizes the commission of war crimes, even of genocide. Indeed, the very day after that vote, the Pentagon announced that it would begin "area bombing," which the Washington Post (4/30/99) characterized as "dropping unguided weapons from B-52  bombers in an imprecise technique that resulted in large-scale civilian casualties  in World War II and the Vietnam War." It was your vote in support of this resolution that precipitated my  decision that my conscience required me to resign from your staff. 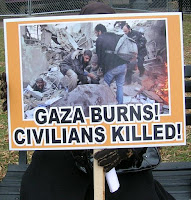 A 2015 Alternet article covered the staffer's resignation and mentions more recent “troubling” behavior by Sanders. While he voted against the 2003 Iraq war, “he also voted in favor of authorizing funds for that war and the one in Afghanistan.” More recently, he voted for a $1 billion aid package for the (neo-NAZI- riddled) 2014 “coup government” in Ukraine.


Alternet says Sanders also supported Israel's 2014 bombing of Gaza which left over two thousand Palestinians dead and a significant percentage of the population homeless. At a town hall meeting Sanders stated that Israel might have "overreacted", but merely blamed Hamas. He did not mention Israel’s starvation of the Palestinian population or continuing confiscation of Palestinian lands in the West Bank.  After a woman asked why Sanders refused to condemn Israel's actions, he told critics: "Excuse me! Shut up! You don’t have the microphone.”  See this Alternet article for the dirt on his position on the land-grabbing-ethnic-cleansing-through-bombing-and-starvation state of Israel.


This video of Sanders yelling at a protester also was widely distributed during 2014.

Decentralists and secessionists in Vermont comment on Sanders in this August 2015 Bill Kaufman article in the AmericanConservative.  While applauding some of Sanders' accomplishments, Kaufman writes “On the down side, Bernie is impervious to facts. He’ll say anything to advance the movement, and he’s not technically lying. You have to know the truth before you can lie, and for Bernie the Truth is what is required to be true by Marx’s scientific theory of history.”   Typical commie!!

Kaufmann notes that one secessionist leader of the Second Vermont Republic was quoted as saying that Sanders wasn’t happy when he was invited to become President of a secessionist Vermont Republic.  Of course not, he doesn’t want to break up “big power”, he wants to concentrate it in the hands of the “right people”, all of whom doubtless will be very left wing and as intolerant of dissent as Sanders has been.

I joke that if Sanders or Trump get elected, either might impose martial law. Trump, if he can't get his way with Congress and Sanders when millions of right wing conservatives start a serious secession movement. Who knows, skeptical peaceniks might join them, especially if it was a war clearly for his buddies in Israel. But don’t worry, nonviolent libertarians and decentralists will work to try to make it a peaceful secessionist movement...Considering the military is less likely to follow a socialist dictator than a fascist one (i.e., the Republicans and maybe Hillary), would Sanders crank up the printing press to bribe the military into crushing us? Give them all the weapons they want and tripple their pay and pensions? Probably any president out to crush American dissent and/or secession movements would have to do so.  Hopefully, we'll build a movement big and broad and peaceful enough that we'll never find out.

To end, our local peace group “Stop the War Now” was skeptical of the reasons for the allegedly “humanitarian” war against Serbia.

We called the vicious bombing of urban and civilian sites “Humaniterrorism”.

When I suggested we call our march to celebrate the end of the three month bombing campaign “Not A Victory”, the group happily accepted the proposal.

And I wrote a song about it a couple of us sang as we were marching...

Posted by CarolMooreReport at 10:48 AM

Actually, Carol, you fucking moron, Sanders was "invited" by Tommy Boy Naylor to run for governor in the late aughts but don't let facts dissuade you.

Ha ha. Just wanted to show everyone I got my OWN "Bernie Bros" trashing post. (See next comment on "Bernie Sanders surplus male 'bros'".) Some poverty stricken loser living in mommy's basement?

Or perhaps the Vermont stalker who probably works for Sanders' campaign and evidently has been peeking into my male house mate's window; he's publicly commented on the bed sheet curtains in his windows a couple times! In fact, the stalker could have been standing on the hill near the house and peeking at my house mate in his skivvies. Oh, yuk!

In any case, is this deranged individual inferring that the deceased Vermont Secessionist Thomas Naylor asked Bernie to run for governor as a secessionist? If so, Bernie obviously rejected the offer. After all, Bernie's into controlling the people, not freeing them. So given MY experience with Bernie, I'm quite sure he'd crush all of us individualist/libertarian/free market/freedom lovers who'd tried to secede.