Making fun of the alpha males can be quite a release but have to get more substantive...Fix your websites Carol! Stop messing around!  (OK, an expose on Sanders coming asap and then I'll stop...) 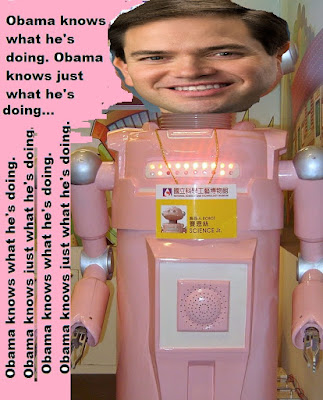 Update 2/26/16: After the 2/25 debate where Rubio took on Trump and his jokes about Trump on 2/26, ("Did Donald wet himself??") I've got to say that Rubio has a great career waiting for him in standup comedy. If he sings, even better.  Then he can hang loose and fully be his happy bi-guy self.  Same thing Obama should have done. I mean lightweight pretty boys running the world is just as bad as heavy weight fools like the Bushes and sex mad bombers like the Clintons.  Abolish large nation states so we don't have to waste more time on this silly madness!!
Posted by CarolMooreReport at 10:30 AM