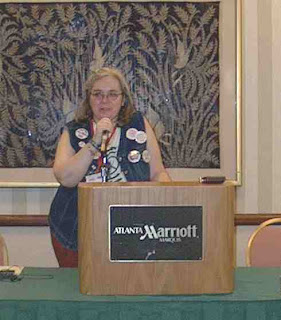 The Libertarian Party has had a hardcore libertarian platform - including the “right of secession of political entities, private groups or individuals” - since its inception in the early 1970s. I personally had never met a libertarian who would use military force against secessionists. See my Libertarian Party page.

However, for years “moderate” and pro-military “libertarians” have been trying to water down the platform’s most pro-peace and freedom planks - including in just the last couple years that supporting secession.

Since the September 11, 2001 attacks, pro-interventionist factions - especially Israel supporters, people working for military contractors, frightened libertarians and, more and more, conservatives and neoconservatives posing as libertarians - have worked to make the radical LIBERTARIAN Party a CONSERVATIVE Libertarian Party. Most of these people are not as hardcore libertarian as Republican Ron Paul!

In 2004 this faction engineered getting its partisans to an off year LP convention held in far off Portland, Oregon. They gutted the platform of its most radical planks - including secession. Since the beginning of this year hard core libertarians (LP Radicals and Restore04, among others) have been working to restore the original 2004 platform, and to nominate a hardcore libertarian candidate for President this Memorial Day weekend. (A convention I just couldn’t get it together to make this year. That's me at 2004 convention, speaking and flashing a peace sign.) 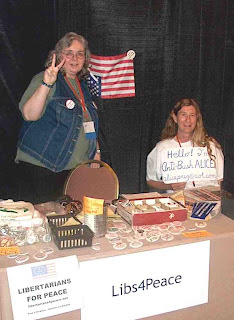 However, some members of the Libertarian National Committee and its office staff (led by a truly sleazy operative named Shane Cory) have been manipulating to give former Congressman Bob Barr the nomination, hoping he could jump on the Ron Paul bandwagon – without being as libertarian as Ron Paul. The takeover is being organized by Richard Viguerie and Russ Verney (Barr’s campaign manager) who in the past raided and decimated the American Independent Party and the Reform Party. (Cory quit his job and now works for them. He loves to threaten to sue people for libel and slander. Would that include this paragraph?)

Read about their crass attempts to take over the Libertarian Party through infiltration and bribery - including by buying ThirdPartyWatch.com. See Is Richard Viguerie Trying to Buy the Libertarian Party? by David F. Nolan (who called the meeting that launched the LP) and Resist Much! by Tom Knapp (long time radical activist). I’ll report briefly on the outcome next time.

As I've said for decades, the problem with political parties is that they tend to attract people who want power, and they can only get that by watering down principles and driving out radicals so they can attract mainstream and even special interest money. So I'm not particularly surprised or discouraged by this. Especially because libertarians are starting to gravitate into the evolving secession movement and I'm working on helping them get there.

I do encourage people to run for office as secessionists - but on whatever party makes it easiest to gain ballot access and all the free publicity running for office can generate. A losing challenger in a major party primary can be just as effective as a losing libertarian or green challenger in the final election.

I’ve just gotten Thomas H. Naylor’s new paperback “Secession: How Vermont and All the Other States Can Save Themselves from the Empire” (intro by Kirkpatrick Sale) and once I finish reading it will report on which of those strategies he prefers.

Posted by CarolMooreReport at 12:45 PM