Since nuclear war and which candidate is most likely to start it is always my biggest election year issue, I made this video comparing how Trump vs. Clinton would comment in a statement after a nuclear exchange that struck the U.S. My Youtube Introduction reads: Many fear that Trump - or Clinton - will start a nuclear war. It's an argument supporters on both sides give for supporting their candidate. Given their histories, I think it is easy to imagine that these are the kinds of statements each might make should nuclear war happen under their "reign".

A few hours after posting it I discovered this article "Poll: Nearly half of voters think Trump will detonate a nuke" which notes that 22% of Trump supporters think he'll user nuclear weapons, something that inevitably would escalate to world nuclear war!

Gary Johnson, the less than perfect libertarian candidate who still is 10 times better than Hillary/Trump, at least would bring up issues that the debate moderators will doubtless ignore. Seven of those, according to Reason magazine, are: the massive and escalating national debt; centralized government taking over state and local issues; squashing international trade (goodbye dollar store, hello $3.50 dish sponge); US military intervention, including with shock and awe, anywhere anytime neocon-neoliberal ideologues feel like it; spying on all of us to make it easy to prosecute and convict individuals of SOMETHING should the state find it to be necessary; free speech - let's keep it!; war on "drugs", i.e., black people, nonconformists or anyone the state wants to target. Check it out!


UPDATE:  During the 9/26/16 Presidential Debate with Hillary Clinton, Donald Trump quickly melted down and descended into confused ranting, as expected. To me the most significant aspect of the debate was the debate stage background: the first lines of the Declaration of Independence which, as I love to remind my readers (i.e., the millions yet to discover this blog), include the phrase highlighted in the memes below. (The first from the debate, the second my last July 4th meme.) 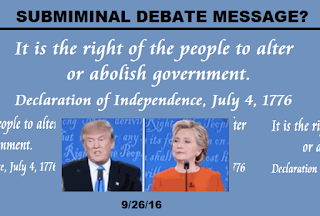 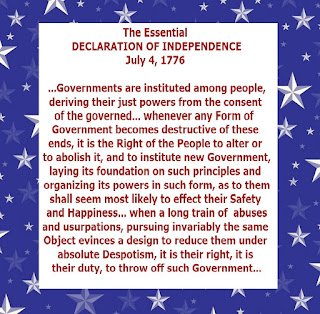 Posted by CarolMooreReport at 8:29 PM