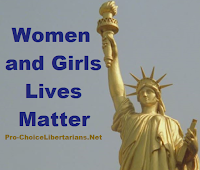 Per previous posts, the last few months I spent a lot of time working on Pro-Choice Libertarians activism (Facebook page, website, twitter page, buttons, etc.). This was both before and after the Libertarian Party national convention where the less than perfectly libertarian Gary Johnson and Bill Weld were nominated for Prez and VP. We had to organize because once again the abortion prohibitionists and the "moderate" sell-outs eager to get their money and votes were conspiring to dump the pro-choice platform. For almost twenty-four years the platform explicity has said government should stay out of the matter of abortion.  (It used to say a lot more but the moderates did some successful gutting of specifics on most issues back in 2006.)

At least Johnson/Weld are described as pro-choice, though Johnson has cleverly positioned himself to appeal to abortion prohibitionists as well. He says he supports current law, even as he says he himself is pro-life and that it would be more constitutional to let the states legislate the issue. And, of course, he takes the totally unlibertarian position that the federal government should be able to force private and government restrooms, changing rooms, shelters, etc. let any deluded guy who claims he's a woman - not to mention any convicted sex criminal -  freely enter those facilities. They're even letting some into women's prisons where the prison staff ignore women who complain they've been raped by these "women"!  Yes, we are living in Big Brother's world where if he says a man is a woman or vice versa, we have to agree. In Canada they'll imprison you if you disagree. In NYC they only fine you.

Well, I think you can tell what another patriarchal issue is that's taken up a ridiculous amount of my time.  But I've met a bunch of hardcore feminists, online and in person, lately who are also really pissed off at patriarchy right now and they have inspired and energized me. (Finally, after 8 years of sulking in my room and fighting with statist, sexist jerks on Wikipedia.)

So now I've gotten back on track on updating Secession.net and CarolMoore.net websites which are ridiculously 2003 in formatting.  But first I had to make a little detour to StopTheWarNow.net. I needed a thoroughly RADICAL LIBERTARIAN FEMINIST SITE to refer Secession.net visitors to, without turning that into a RADICAL DECENTRALIST LIBERTARIAN FEMINIST SITE. (Though who can tell, if enough women decide to join the libertarian decentralist feminist movement we might yet do it.)

So check out StopTheWarNow.net., all my visitors - current or future... 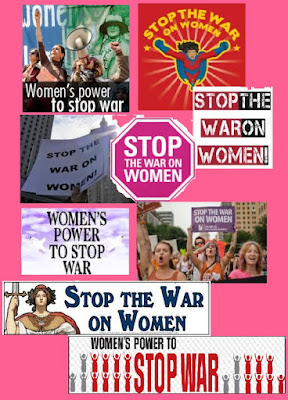 Posted by CarolMooreReport at 12:06 AM