I've been fuming for a couple of days about two articles I read detailing problems with the mainstream media. I even tweeted them. (Link to top, link to bottom.) 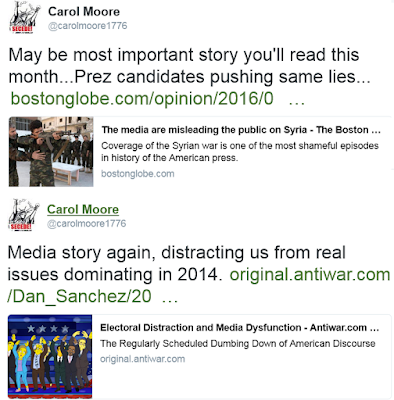 Well, today The Donald (Trump, for posterity) socked it to the media in a way that really punishes them for their lazy, biased, ratings/money-driven reporting.  After complaining that Jeff Bezos bought the Washington Post to influence Washington politicians and help his company Amazon, Trump declared

... And believe me, if I become president, oh, do they have problems. They're going to have such problems. And one of the things I'm going to do, and this is only going to make it tougher for me, and I've never said this before, but one of the things I'm going to do if I win -- and I hope I do and we're certainly leading -- is I'm going to open up our libel laws so when they write purposely negative and horrible and false articles, we can sue them and win lots of money..... We have many things to do. We have many, many things to do.


Can he "open up our libel laws? Probably, a Post writer replies.  He also can push to tax internet sales, or find some phony law that Bezos or the Post allegedly is breaking and use it to break their connection.  So many ways to destroy them, so little time.

What of the "many things" he also can do to other media outlets, without congressional approval or a Supreme Court OK?  He can use his administrative power as defacto head of the Federal Communications Commission to threaten the licenses of any radio, television or cable channel going out over the publicly administered airwaves.  (And, of course, fulfill his past threat of "closing up the internet" to anyone who says anything he doesn't like.)  So Americans won't dare raise too much of a fuss when he cracks down on protest, free speech, freedom of association, etc. etc. etc.

Which led me to make two more tweets! The first (bottom) on FCC licensing and the second (top) on what Trump will do to protesters, which I sent to TheFix (aka the Washington Post writer noted above). 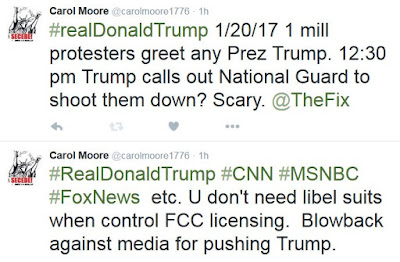 Of course, the one good thing Trump talks about that probably drives media moguls craziest is Trump's promise to be neutral on Israel.  His way of getting back at all the New York Jews he thinks have screwed him?? (It's not human empathy for Palestinian land loss and relegation to defacto concentration camps by the Israelis, I'm sure...)

Yup, all the people who made dough off news stories about Mussolini and Hitlers' crazy rants in the 1930s sure found out where that got them, didn't they?? Let's start getting serious about how dangerous this guy could be.  He may not have Hitler's shriveled genitals, but he's got some sort of shriveled ego problem that could be very dangerous. 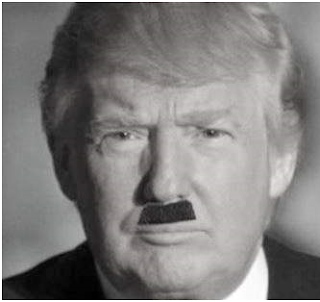 Update: The Post response? An interesting Hitler comparison and then - everyone should drop out but Rubio! Raw Story is more on target: "Trump can’t handle media criticism — so now he’s promising to disembowel the First Amendment"
Posted by CarolMooreReport at 5:37 PM