23 years since Americans were shot from military helicopters

Oh, you didn't hear about it?  Well, I was so outraged and traumatized I wrote a book about it, published in late 1995 - years before even more evidence of government crimes was exposed. And before the federal government managed to convince anyone that government agents had committed no crimes.

As I write in the introduction to my online version of the book at CarolMoore.net/Waco:  On February 28,1993 overly aggressive and highly militarized agents of BATF set out to put on a "big show" to increase their budgets and prestige by attacking the Branch Davidian religious group outside of Waco, Texas.  Six months earlier, agents had spurned David Koresh's attempts to cooperate with their investigation of his gun business by inviting them to see his guns.  On February 28, when he came to the front door and tried to cooperate, reckless agents shot him and mortally wounded his father-in-law. Other agents started shooting from helicopters, killing four Davidians. Agents probably assassinated another Davidian who approached Mount Carmel later that day.  And so began a 51 day standoff.

The last week I've finally gotten around to re-filing all my research materials, and later materials produced by myself and others, related to my book, our DC Committee for Waco Justice and our work helping the Branch Davidian prisoners. At 67, you never know when you are going to kick over. In that event, I want the best materials nicely boxed and organized for mailing to the organization or academic institution that wants them and will make good use of them. 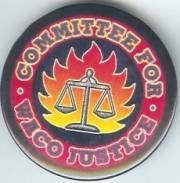 Seeing all the material not included in my book, my natural urge is to update the book.  But I'll have to settle for tempting some historian into writing a definitive work. Or maybe at least get a HUGE data base going - or a Wiki? So many possible projects, so little time.

Anyway, the Davidian prisoners are free now, some in the early 2000s, the last, a non-cooperator, in 2007. The children who lost their parents and brothers and sisters are all grown up and many have children of their own. And the few adult survivors, the ones who haven't passed on, are still living with the trauma.

I remember a peace movement meeting way back in 1997 or '98 where I brought up in very general terms "the militarization of law enforcement". I didn't even mention it was something of which the Davidian massacre was a prime example.  I remember one or two young socialist men mocking the very concept, as if they would never have to face such a thing.  A couple years later these guys were supportive of the Black Bloc groups that advocated fighting with the militarized police. And 10 years later at least one was still active, involved in the Occupy Movement, a movement broken up by government surveillance and militarized police. (See an outline and links to relevant articles at the Wikipedia article on the movement.) 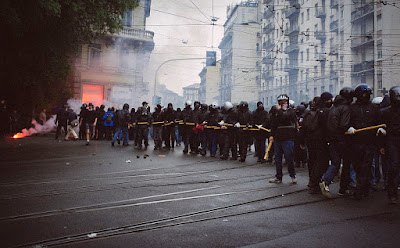 So for anyone who thinks I'm being paranoid about a presidential candidate who talks about beating up protesters, shooting people in the street, torturing people he defines as terrorists - and who claims he finds it difficult to remember who David Duke and the Ku Klux Klan are... all I can say is, I was predicting the inevitable rise of homegrown fascism and militarized police more than twenty years ago. Sad to see I was so right...

As for Hillary Clinton, she doubtless was consulting with her rapist husband Bill Clinton when he allowed his buddy Webster Hubbell, the U.S. Associate Attorney General sitting in the FBI Operations Center, to make the call to send tanks deep into the Davidians' home. Tanks eventually started at least one accidental fire (possibly followed by a couple of traumatized Davidians' intentional fires), that burned the building to the ground, killing 76 people. (See Chapter 11.) Considering that so many children died that day, in one of our Committee for Waco Justice protests we mocked Hillary's book "It takes a Village to Raise a Child" in our protest banner below. 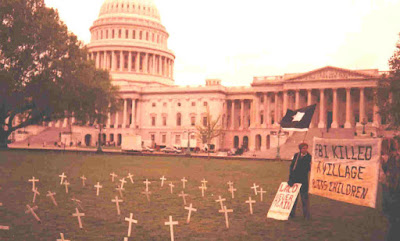 Below is my graphic that shows the trajectory of bullets fired from a helicopter and the deaths that resulted. Below is an FBI overhead photo showing the massive explosion of a propane tank well into the progression of the fire.  Let us pray that Americans don't directly do this to Americans again - or anyone else. 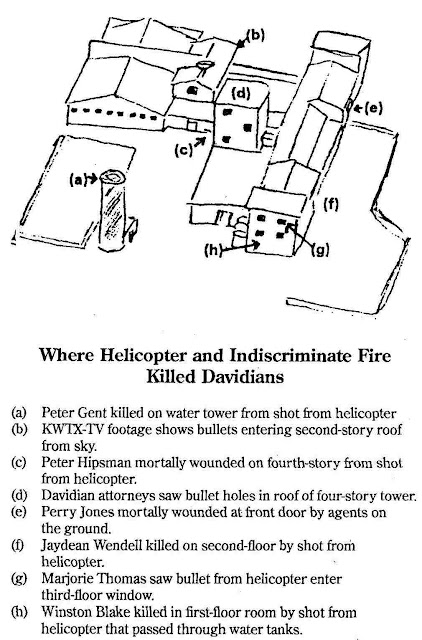 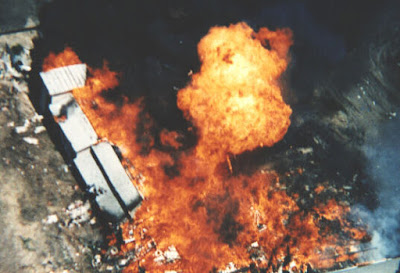 Update 3-11-16:  Oregon police released videotape of the January shooting of LaVoy Finicum during the occupation of the Malheur National Wildlife Refuge. The synced investigation video from the air and in the automobile helped reveal that the FBI shot two shots that hit the automobile before Finicum left it. They did not admit to shooting and other FBI agents helped them cover up the fact. His wife believes that Finicum was not reaching for his pocket, leading to the police to shoot him, but that he was grabbing his chest after he was shot, leading to more police gunfire. Just evidence that we can't trust the FBI any more than local police to be cool headed and honest.  See more at OregonLive and RT.com. Synced video from The Oregonian is here.
Posted by CarolMooreReport at 9:55 PM