Nuclear war still inevitable or "When will Enola Gay get nuked?"

I just read a "Hiroshima Day"-related article about the restored air force bomber Enola Gay which dropped the atomic bombs on Hiroshima and Nagasaki in August 1945. The purpose: to scare the heck of the Russians and, oh, yes, tell Japan it was ready to accept peace negotiations...

And looking at it parked all shiny there at the National Air & Space Museum at Washington Dulles International Airport, my first thought was: someday it's probably going to get nuked. Dulles is of course a prime nuclear target in case of nuclear war with Russia or China, the two nations with the most nuclear power to "knock us" (as one general once put it). 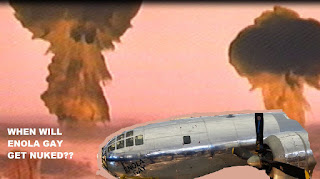 This video reminds us what it will be like.  Looks like scenes from the movie THE DAY AFTER.Of course, those living in a dream world will continue to deny the inevitable... But as long as there are patriarchal nation states fighting for territory, power and pride, it is inevitable. Check out Secession.net.

Update: For those who like to list to long discussions without photos, here's how US government covered up its crimes at Nagasaki and Hiroshima.  Lots of other relevant videos searchable on Youtube.

Posted by CarolMooreReport at 2:40 PM