I happened upon the excruciatingly painful yet inspiring video of Emmanuel Kelly singing John Lennon's Imagine on a tv talent show.  He and his brother Ahmed are both "DU" babies deformed in the aftermath of the United States bombing Iraq from 1991 to 2003 using thousands of armor-piercing munitions reinforced with depleted uranium. (A topic I've covered before here, as well as here regarding US use against Libya in 2011.) 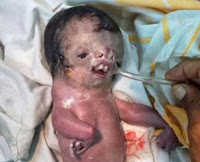 Many such babies miscarry or die soon after birth, having deformities like hearts or brains growing outside their bodies. Many also live for years, severely deformed with missing limbs, mangled faces and even two heads.  Emmanuel an Ahmed were born with malformed limbs and hips. Their parents abandoned them and they were adopted from a Christian orphanage by an Australian humanitarian Moira Kelly.

Of course, except for the Daily Mail, most sources merely mention they were victims of "chemical warfare", the implication being that Saddam Hussein was responsible. (The fact he got his weapons from the US and used them on Iran, after the US encouraged him to attack that nation also is mentioned too rarely.)  Both boys have done their best to transcend their disabilities. Ahmed is a swimmer who participated in paralympic swimmers competitions.  Most surviving DU babies live in underfunded orphanages or, at best, are trapped with their families waiting to see who will be crippled and killed next, given the instability and violence caused by the United States attacks on that country and region.

I've been remembering lately that all this destabilization and destruction of the Arab world was engineered by neoconservatives and pro-Israel lobbyists in the United States. I remembered the 1996 report prepared for Benjamin Netanyahu called "A Clean Break: A New Strategy for Securing the Realm".  In it neoconservatives - mostly also pro-Israel lobbyists - recommended Israel destabilize nearby nations to its own advantage. And let's not forget the 1997 Project for a New American Century and its "Rebuilding America's Defenses" which expanded on that and similar themes, mentioning in passing how the US needed a "Pearl Harbor" type episode to motivate it to join in destabilizing the region.

Here's one of many analysis of how damaging the "Clean Break" philosophy has been as it become to the American people and the world. It has harmed both the United States (costing 6 trillion or more dollars and thousands of lives) and the Arab world (costing trillions more and hundreds of thousand of lives).  Emmanuel and Ahmed were early victims, before its publication. But we've all been victims since.

In spring of 2014 the National Summit to reasses the U.S.-Israel "special relationship" took place at the National Press Club and aired on C-SPAN. "The nonpartisan symposium examined the impact of the U.S.-Israel relationship on Americans. Speakers and attendees included military, diplomatic, intelligence, academic, governmental, research organization and economic experts, as well as former and current members of Congress." You can see all the videos listed in order with brief intros at the If American's Knew Summit page.  Steven Sniegoski below talks about this issue. As he mentions, the neocons have not yet gotten the United States to fight Israel's war against Iran for it.  But they keep pushing it.  Sane Americans and people world wide have to push back against them, and hard.

Posted by CarolMooreReport at 1:43 PM