Biorhythm’s are ups and downs in physical, emotional and intellectual energy which begin at the day of one’s birth and are the same for everyone on the 1st, 100th or 10,000th day of life. People with the same birth dates will find they have the identical biorhythms for any particular day. However, since most of us associate with people NOT born on our birthdays, we usually have very different biorhythms than others. 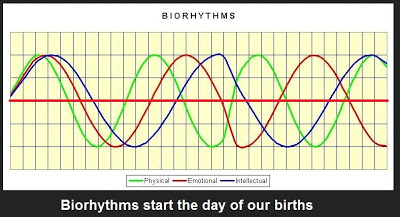 During the up half of the cycle people will be more energetic, emotional and intelligent; during the down cycle, less so.  The physical cycle, the most noticeable, lasts 23 days; the emotional, lasts 28 days; and the intellectual lasts 33 days. On “cross over days” (the red horizontal line on this adapted Wikicommons graphic) where the down cycle goes up, or the up cycle goes down, people may be erratic and confused.

Skeptics may call it "pseudo-science" but if they had been observing their biorythyms and making use of that information for 35 odd years like I have, they would be far less skeptical.

This really comes out when two people are engaged in competitive behavior, like political debates. (Sports handicappers have been known to use biorhythms to predict the outcomes of boxing matches and even team sports.)

Let’s look at Barak Obama (b. August 4, 1961) and Mitt Romney's  (b. March 12, 1947) biorhythms on the three days of their presidential debates.  Compare the analysis with what you witnessed and pundits have said. 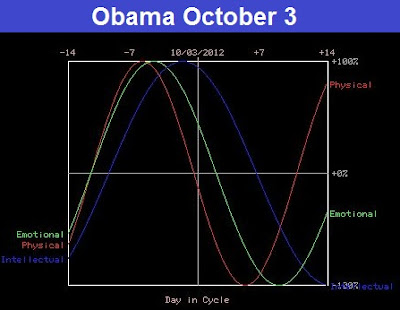 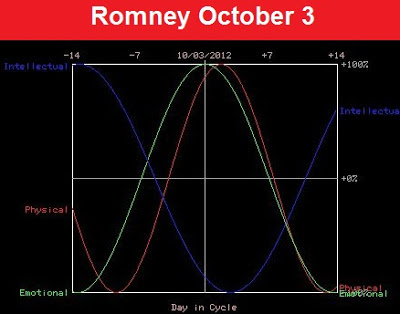 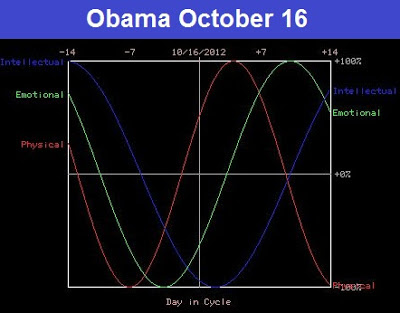 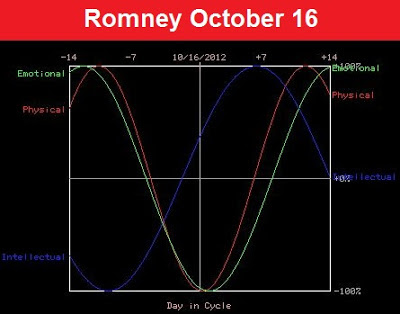 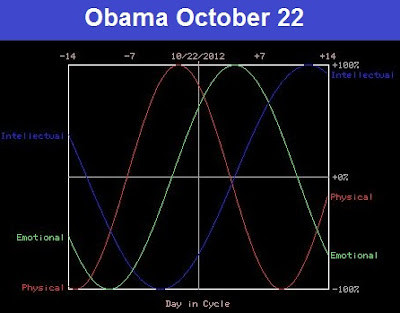 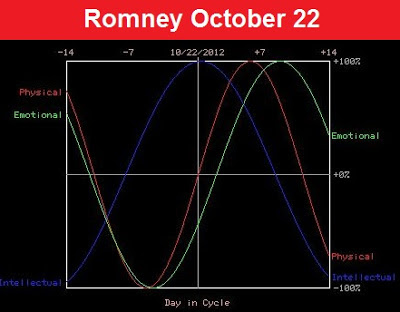 What might we predict for the all important foreign policy debate over whether we’ll let another country drag us into a ten trillion dollar war??  Obama will energetically and emotionally defend his record and maybe repeat that phrase “I’ll do what’s best for America” (i.e., as opposed to what’s best for Bibi Netanyahu and Israel). And Romney will have to rely on his fast thinking - if not much emotional and physical energy - to explain why he’s not just a pawn of the Neocons and Netanyahu. He'll have to convince the millions wary of Mormonism that he himself is not eager to go be the Mormon Savior off to war to win Jerusalem for the Chosen People - the Mormons!!

Update:   James Carville said it all - "Somebody gave Romney the same drug they gave the President before the first debate."  Obviously, it's not ALL biorhythms. In the first debate, Obama hadn't debated in years and Romney had done so dozens of times in the last two years. In the last debate, Romney had to both speak intelligently on an area he is less than expert AND lie to the American public (and/or? stab his neocon supporters in the back) by acting like a peacenik, saying "We can't kill ourselves out of this mess."

Posted by CarolMooreReport at 2:39 PM