US-Israel Attack on Iran Will Lead to World Nuke War 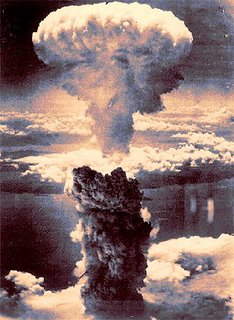 That's what I think. And that's why I've spent almost two years focusing on this issue, organizing web pages and meetings and forums and protests against such a war -- and against the neocons and the Israel Lobby which remain the main network of groups drumming up business for this war.
.
My STOPTHEWARNOW.NET focuses on the issue. While many of the links to news items are dated - because you can news.google all you want on today's news -- the Protests and War Lobbies pages are up to date. (I did stop linking to articles about Professors Walt and Mearsheimer's THE ISRAEL LOBBY AND US FOREIGN POLICY paper when the flood became overwhelming. Google for lots of them.) See links to groups actively working against the NEXT war.
.
Here's the text of the leaflet I've been handing out for last couple months that says it all:

.
STOP COMING WAR VS. IRAN
DON'’T LET BUSH AND THE NEOCONS LIE US INTO A CATASTROPHIC WAR
.
President Bush and his neocon/Israel Lobby allies are using the same kind of lies and provocations against Iran used in the buildup to the Iraq war. Iran President Ahmadinejad'’s (largely misquoted) statements against Zionist colonialism up the ante. The United States and Israel want to maintain U.S.-Israel control of land, oil and peoples in the Middle East through their nuclear monopoly. They'll initiate a dangerous war against Iran, using nuclear weapons pre-emptively against "hard targets"” or to retaliate against Iran fighting back. This attack could spin out of control into world nuclear war within days! We must take on Bush AND his war lobbies NOW!
.
US-ISRAEL WAR AGAINST IRAN MAY LEAD TO MOST OR ALL OF THE FOLLOWING:
* Iranian officials have made credible threats to retaliate with accurate, high explosive missiles against Israel'’s nuclear plant and cities, U.S. bases and troops in Iraq and U.S. ships at sea. They could deploy millions of troops and enter Iraq. Only nuclear weapons can stop them.
* The US probably would re-institute a military draft and use the fact of "“nuclear war"” it had initiated to squelch protest or declare martial law.
* Iran could cut off much of the world'’s oil which comes through the Straight of Hormuz, driving the price of oil sky-high, devastating the world economy.
* Russia and China could retaliate by dumping the U.S. dollar, forcing up interest rates and prices of imported and even domestic goods; if the housing bubble burst most Americans would be impoverished.
* Russia and China have made new nuclear, trade and political alliances with Iran which ups the ante of any conflict. Russian military leaders could panic at American nuclear bombs exploding a few hundred miles from Russia and attack the U.S.
* Outraged Pakistani radicals could take over its nuclear weapons and bomb Israel, unleashing Israel'’s infamous "Samson Option" (as described in Seymour Hersh's book of the same name) of nuclear attacks against Arab and even European and Russian cities, leading to Russian retaliation against America. (End leaflet text).
.
If you want to get more scared and see lots of horrific photos from nuclear war movies go to my nuclear war page.
.
Get Don't Bomb Iran and Don't Nuke Iran t-shirts and buttons accessible from links to the right side of this blog. 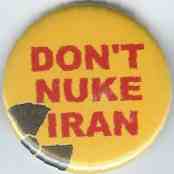 Posted by CarolMooreReport at 2:46 PM