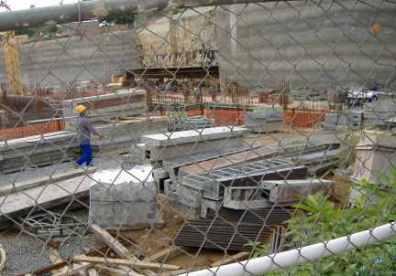 Thursday, July 5 I protested with 50 activists against Israeli attacks in Gaza. See video of Imans, Ministers and others excoriating Israel and its lobbies at my page on YouTube.com and photos at my site. A dozen cops and half-dozen Israeli security kept us on our sidewalk, as would be expected. What was less expected was what happened when I tried to take photos of the construction of the giant hole that is the basement of the new Chinese Embassy being constructed right across the street from the Israeli Embassy.
.
Walking on a public sidewalk, I approached within 15 feet of several Chinese workers to take a photo. One immediately came up to me and said in the authoritative voice of a government security official: "No photos. You can't take photos." I laughed. "But I need to take photos of that big bomb shelter you are building." "No photos! No photos!" He repeated. "But living in DC you guys NEED a bomb shelter don't you?" I laughed and walked away. I later ostentatiously took a number of photos from another sidewalk, including of the workers who watched our protest with great interest.
.
Needless to say, this incident could be just a shade of things to come as Chinese influence rises in the United States, due to the U.S. government-induced massive American trade deficit to the Chinese as well as our financial dependence on them to fund the national debt. I always joke that someday we'll just have to trade them 10 percent of America to pay off the debt. And as a libertarian I don't have a problem with that or tens of millions of Chinese moving to this country -- as long as they leave their authoritarian government and officials over there.
.
Of course the neocons who are in league with the Israel Lobby have a simple solution to the problem - attain U.S. nuclear supremacy or primacy and first strike Chinese nuclear and military capability so they have to accept whatever business terms the United States decides to grant them. Watching that huge embassy growing and over-shadowing the relatively small Israel Embassy across the street must make the Israel Lobbyists fear losing their current influence over us foreign policy and push for the day those first strikes are unleashed.
.
Speaking of the Israel Lobby, at my YouTube.Com page also see my new video of Maryland U.S. Senate candidate Kevin Zeese's comment on the undue influence of the lobby. The speech also was televised on C-SPAN. Zeese is running an Independent Unity campaign, having been endorsed by the Libertarian, Green and Populist parties in Maryland. He was going to run on all three party lines, but the Maryland legislature immediately passed a law to forbid candidates from running on more than one party line at a time! Between Walt, Mearsheimer, Zeese and the Chinese, the Israel Lobby must be getting a little nervous.

Update: Here's a photo of just the entrance of the Embassy, opened in summer of 2008, just before the Olympics in Beijing. 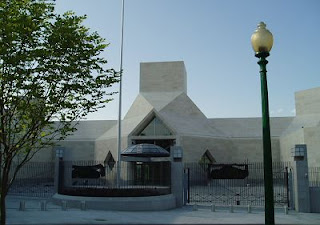 Posted by CarolMooreReport at 12:37 PM