This is most of a July 3, 2008 entry at my "Secede and Survive" Blog located for a few years at the "Vermont Commons" website. (Its editors have transformed it now into "The Vermont Independent".)  I've added a few graphics to the quotes from various pundits on the topic of "the right to alter or abolish government" found in the Thirteen Colonies 1776Declaration of Independence, for which we celebrate July 4th. Enjoy!

Did Thomas Jefferson know that putting the peoples right to alter or abolish government in the Declaration of Independence would encourage people to do it? Actually, he feared there would not be enough revolutions. As he wrote to William S. Smith Paris on Nov. 13, 1787:

The British ministry have so long hired their gazetteers to repeat and model into every form lies about our being in anarchy, that the world has at length believed them, the English nation has believed them, the ministers themselves have come to believe them, & what is more wonderful, we have believed them ourselves. Yet where does this anarchy exist? Where did it ever exist, except in the single instance of Massachusetts? And can history produce an instance of rebellion so honourably conducted? I say nothing of it's motives. They were founded in ignorance, not wickedness. God forbid we should ever be 20 years without such a rebellion. The people cannot be all, & always, well informed. The part which is wrong will be discontented in proportion to the importance of the facts they misconceive. If they remain quiet under such misconceptions it is a lethargy, the forerunner of death to the public liberty. We have had 13. states independent 11. years. There has been one rebellion. That comes to one rebellion in a century & a half for each state. What country before ever existed a century & half without a rebellion? & what country can preserve it's liberties if their rulers are not warned from time to time that their people preserve the spirit of resistance? Let them take arms. The remedy is to set them right as to facts, pardon & pacify them. What signify a few lives lost in a century or two? The tree of liberty must be refreshed from time to time with the blood of patriots & tyrants. It is it's natural manure. 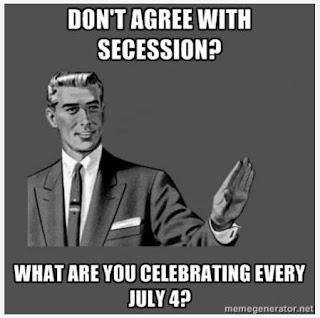 My News.Google search for “the right to alter or abolish” resulted in the usual full reprints of the Declaration of Independence which many newspapers provide to educate our many confused sister and brother citizens.  I also came up with a couple of editorials of interest.

The Baltimore Chronicle, the Hawaii Reporter and doubtless other publications, printed an editorial by radical libertarian columnist Jacob Hornberger "The Real Meaning of the Fourth of July." 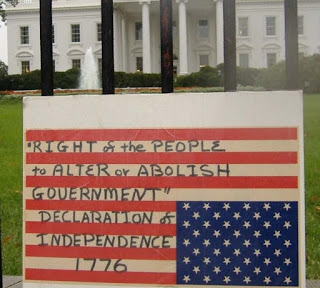 [T]he real significance of the Fourth of July lies in the expression of what is undoubtedly the most revolutionary political declaration in history: that man's rights are inherent, God-given, and natural and, thus, do not come from government.

Throughout history, people have believed that their rights come from government.

Governments are called into existence by the people—and exist at their pleasure—for one purpose: to protect the exercise of their inherent fundamental and unalienable rights.

The Declaration of Independence upended that age-old notion of rights. All men—not just Americans—have been endowed by God and nature, not government, with fundamental and unalienable rights. Governments are called into existence by the people—and exist at their pleasure—for one purpose: to protect the exercise of these inherent rights.

What happens if a government that people have established becomes a destroyer, rather than a protector, of their rights? The Declaration provides the answer: It is the right of the people to alter or even abolish their government and establish a new government whose purpose is the protection, not the destruction, of people's rights and freedoms.

In the American Spectator Lawrence Henry celebrates the recent “DC vs. Heller” Supreme Court decision. (Dick Heller was a past officer of the Libertarian Party of DC.) Henry emphasizes that issue, writing: Fourth of July weekend, here's as good a time as any to review what the American idea really means. And how far we have fallen away from that idea.

Conveniently, we find a news hook: The Supreme Court's recent 5-4 ruling affirming that the Second Amendment to the Constitution really does assure citizens the right to keep and bear firearms. Along with many another commentator, I find that close decision frightening. How can there be any doubt? How can there be any argument?

Our Founders said, explicitly, that when a people found their rulers had usurped the rightful reach of their powers, it was the people's right to "alter or abolish" that government. And no mistake, our Founders, being realists, knew that "alter or abolish" might mean "change the government by violent means, if necessary."

HomeTownAnnapolis.com writes: In truth, no one ever expressed the purposes of a free society better than Thomas Jefferson in the opening words of the Declaration of Independence:

It is self-evident - it does not need to be argued - that all men are created equal, and have been endowed by their Creator with rights, including life, liberty and the pursuit of happiness. Governments are instituted by popular consent to guarantee these rights. If a government attacks these rights, the people have the right to alter or abolish it and try again....

for Americans, patriotism is not hard to define. If you accept the principles set out in the Declaration of Independence, and are ready to do all you can to live by and uphold those principles, you're a patriot. If you don't, you may be a fine person in other ways, but you're not a patriot.

And not to beat around the bush, conservative writer J.J. Jackson gets to the heart of it in his article “Alaska should just secede.” Quoting the Declaration, he writes: I think that it is high time some states start taking the issue seriously once again and using it as leverage against an out of control federal government that has expanded beyond the limited powers we agreed to give to it in our Constitution. While I would like to see all the states start pushing back against the gluttonous federal government and begin warning, that if it does not start acting as prescribed, they will leave the Union, one state in particular that should be seriously considering it, perhaps more than most others, is Alaska.

Al-Jazeera makes a telling comment in an article: "Before July 4th, the U.S. must confront July 3rd." It reminds readers about the July 3, 1988 attack on an Iranian commercial airliner that killed 290 men, women and children. And writes about talk of a U.S. attack on Iranian nuclear facilities: As the U.S. readies itself to celebrate another Independence Day on July 4th, I cannot help but think how the U.S. Government has become enslaved to hatred, revenge, retaliation, belligerent policies, nuclear weapons, and of course, Middle Eastern oil.

If the U.S. confronts the July 3rd massacre before celebrating July 4th, it may then be a true celebration! U.S. citizens may also want to recall the patriots’ purpose in signing the Declaration of Independence was not a call to alter and abolish a foreign country, but to change and abolish their own Government, which had become destructive and repressive.

Of course, potential tyrants also can quote the Declaration, as does Iranian Maryam Rajavi, head of the Iranian Islamic Marxist cult best known as “MEK” which seeks to overthrow the current Iranian government.  At a gathering of 70,000 Iranians in Paris she said: And I quote the Declaration of Independence, "Whenever any form of Government becomes destructive of these ends, it is the right of the people to alter or abolish it, and to institute new government." (For a number of years MEK was labeled a terrorist group by the State Department, but its usefulness in spying on Iran was paid off by neoconservatives and neoliberals in the government by lifting that description a few years back.)

I can't help but comment on politicians who can’t talk about the Declaration of Independence without bringing in that great enemy of altering and abolishing government, Abraham Lincoln. More specifically Barack Obama in his recent speech on “Patriotism.” He starts with an interesting statement about American revolutionaries fighting the British on April 19, 1775. “They did so not on behalf of a particular tribe or lineage, but on behalf of a larger idea. The idea of liberty. The idea of God-given, inalienable rights.” (Something those itching to engage in violent revolutionary secession for the sake of THEIR tribe or lineage might keep in mind.)

After that he quotes from the Declaration of Independence but conveniently leaves out our right to alter or abolish the government that might make him its president.

However he almost makes up for it later saying: As Mark Twain, that greatest of American satirists and proud son of Missouri, once wrote, "Patriotism is supporting your country all the time, and your government when it deserves it." We may hope that our leaders and our government stand up for our ideals, and there are many times in our history when that's occurred. But when our laws, our leaders or our government are out of alignment with our ideals, then the dissent of ordinary Americans may prove to be one of the truest expression of patriotism.

Ed Quillen facetiously updates the Declaration in the Denver Post.  Noting that it “has this seditious-sounding stuff about how it ‘is the Right of the People to alter or abolish’ their government. He thus offers this version: 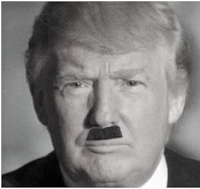 "When in the Course of human Events it becomes necessary for the Unitary Executive to dissolve the Political Restraints which have constrained him from assuming, among the Powers of Earth, his proper role as the Decider, a total Disrespect for the Opinions of Mankind means that no Explanation is required.

"Nonetheless, the Unitary Executive holds this Truth to be of divine Origin, that the Executive Branch of Government enjoys certain unalienable Rights, that among these Rights are Spying upon Citizens without a Warrant, the Rendition of Captives unto foreign Despotisms, the Invasion and Occupation of other Nations upon false Pretenses, and the Employment of Torture to gather Evidence to be used in secret Courts.

Finally, Kirkpatrick Sale of the Middlebury Institute sends out an email wishing us all “Happy Secession Day.”

July 4 marks the day when the American colonies declared their secession from the British empire and their right to “institute new Government, laying its Foundation on such Principles…as to them shall seem most likely to effect their Safety and Happiness.”

And thus began the War of Secession—not a revolutionary war, for there was no intent to overthrow the British government—that led to the free Confederation of American colonies and ultimately the United States.

It is in that great tradition that the modern secessionist movement in America takes its inspiration, hoping to dissolve the imperial government of the present United States and institute new governments, at state or regional levels, that will positively effect their safety and happiness. 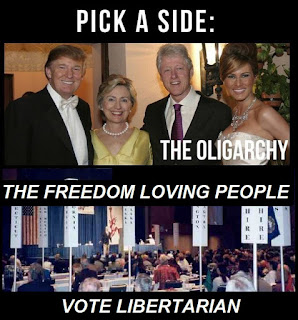 Posted by CarolMooreReport at 10:33 PM