Amanda Marcotte in Salon discussed a subset of male-pattern violence, i.e, "toxic masculinity". After reassuring readers she was not talking about ALL MEN, she writes:


So, to be excruciatingly clear, toxic masculinity is a specific model of manhood, geared towards dominance and control. It’s a manhood that views women and LGBT people as inferior, sees sex as an act not of affection but domination, and which valorizes violence as the way to prove one’s self to the world.

Of course, she's for getting rid of assault weapons, which is a great idea over the long haul, starting with getting rid of the government's assault weapons in civilian law enforcement. While she's right there is the psychological pressure to prove manhood through violence, there also is a political reality: special interests and politicians want to loot us and make us slaves to their whims and needs. The people need to defend themselves against the government. 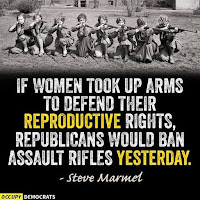 This is somewhat more true of the Democrats (and their socialist allies) who ideally would have an armed spy on every block to make sure we are all unarmed, compliant and politically correct as  they loot us. Republicans have managed to convince gun owners they are on the side of liberty, as long as you don't use guns to defend your right to abortion, psychoactive drugs, resist taxes or compete with business special interests that bribe Republicans. (Democrats at least will let us have our abortions, and a little marijuana, too!)

Amanda Marcotte somehow fails to mention getting rid of militaries and war. Which makes her look like a total shill for the Democrats.  Good try, Amanda.

One guy in the comments section complains that she doesn't put any responsibility on women or say what women should do about it.  Unfortunately, women married to the worst kinds of bastards can't easily divorce them, and doing so often really sets them off, resulting in beatings and killings of women.  Women who are single or with decent guys are smart to stay away from those types of bastards, unless it is in a professional psychiatric setting with armed guards in the hallway. 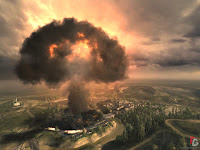 Women COULD go on strike until we get laws pass putting a quota of 51% women in every legislative body in the country as a small step forward.  Of course, our goal must be reducing violence, not using jack booted thugs to lock up anyone who doesn't want to pay 75% of their income in taxes for more social welfare programs to benefit women and some guys. If we depend on the nuclear armed patriarchal state to protect us, we are condemning ourselves to destruction.

Women could do massive civil disobedience by starting currently illegal communes, i.e., by buying up land and nearby homes and businesses, with the help of those wealthy women who will be needed to support our cause. Millions of women could take care of basic economic needs, ensure child care, protect women from abusive bastards - and have lots of free time for even more massive resistance to male violence and war.  And we even could make them all proud secessionist communities which reject all male control, non-violently of course.

We also can stop conceiving as many male children through conception techniques available today. But that's a last resort, if men don't straighten out their minds. Between guys who want to shoot up people to prove they're men or, at the opposite extreme, guys who want to be able to freely barge into women's private spaces to prove they are women, we have a bunch of sick puppies out there (to be generous) who need a lot of therapy.  But how much more sympathy must women give them? Women's sympathy for mentally unbalanced males is our undoing.  I've pretty much given up on it my old age. It's time for tough love and swift kicks in male psychic butts. 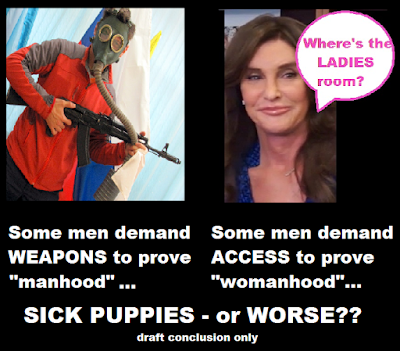 Gee, I liked the above so much I put it in comments on the article. Minus the photos, of course.
Posted by CarolMooreReport at 9:55 PM