The Emporer/Empress is Bisexual - continued...

After the coffee-buzz posting of yesterday afternoon, a late evening continuation on the topic...


It looks like the Rubio story has been around for a few weeks now. Duh...  Here's some gay sites' titulated and/or skeptical responses, focused on those "foam parties" where photos appear to show naked men in foam-covered swimming pools doing who knows what under the foam.(1, 2, 3)  And a couple stories about his friend Barrios’ renting to gay pornorgraphers and defending their activities in court.(1, 2)  Rubio has been mocked by other candidates regarding his high heeled boots, with the inference he’s gay.(1, 2, 3) In response, not only has he created a Youtube ad on the “Rubio Crime Spree” (which jokes about absurdly false allegations as opposed to the actual details of his arrest). And on the Jimmy Fallon show he joked about his boots, including ruining an earlier pair at a “1990s foam party in Miami”. He infers it’s a fully clothed heterosexual party on a normal dance floor.


Rumors of Hillary’s bisexuality have been around for twenty years. Even the Daily Mail covered Bill Clinton’s former lover Gennifer Flower’s 2013 allegation Bill told her Hillary was a very active lesbian.  One site actually mentioned the potential “blackmail” issue of hiding such relationships. The National Enquirer, which revealed the Flowers affair in the 1990s, has been insisting Hillary erased hundreds of emails because they were with or about her women lovers.(1, 2)  A former Clinton insider confirmed stories of her affairs. And conservative gossip Matt Drudge bemoaned the fact the major media doesn’t cover the issue, despite her lovers' names being leaked by the National Enquirer.  And Hillary in 2015 actually responded to the allegations telling a gay magazine: “It’s not true, but it is something that I have no control over. People will say what they want to say.” 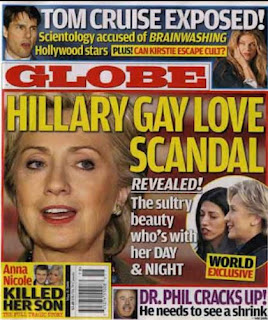 For 9 years Americans had heard about Bill Clinton's alleged and admitted sexual affairs and aggression against women. We figured we’d be safe from such gossip with the "straight" George W. Bush. But evidence of G.W. Bush’s bisexuality began leaking out and over time probably became the most detailed of all these powerful individuals. Various minor sources have covered his possible affair with a college roommate, their trysts with homosexual prostitutes, homosexual orgies in Mexico, and his one or more affairs with men in the White House. Books have been published detailing some of these activities. (See sometimes accurate sources like PrisonPlanet, Rense  and Veterans Today.  Or do a search of the internet for more information.) PoliticalHotwire shows photos of Bush kissing and hugging a male who allegedly is a gay prostitute who frequently visited G.W. in the White House.  G.W.’s activity even is alleged to be related to family political decisions. Could it be true that his father George H. invaded Panama because his dictator friend Manuel Noriega was threatening to publicize sexual photos of G.W. with men?  And how might this ongoing secret impact Jeb Bush, should he be elected president? 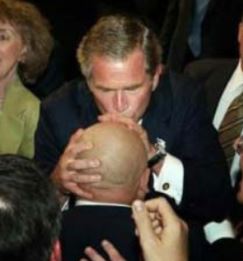 As for Obama, even the Huffington Post covered allegations he was a coke head and gay prostitute in high school and enjoyed the Chicago gay bar and bathhouse scene after college and law school.  In between it’s alleged he was in gay relationships at Occidental College and at Columbia University. The Guardian has a story on his Pakistani housemate in NYC whose photo does make one believe rumors they were lovers.  Wayne Madsen went into great detail on Obama a few years back: on Obama’s finger nail polish at Congress; his gay days in bars and bathhouses in Chicago; and other details. Vice.com has a more recent update.

The issue of possible blackmail by special interests is easily comprehended by most people. However, too many still reject the idea that people should be free to be gay or bisexual and hold political office. I did notice that Wikipedia actually has a category listing of bisexual politicians!

A feminist insight is that males feel they have a right to be closet bisexuals, cheat on their girl friends and wives (possibly bringing home disease). And they have have the right to have the whole thing dismissed with a wink and a nod by male dominated professions like politics and journalism where “boys will boys” attitudes rule.  And some women, like Hillary and her lovers, also have been successful in keeping a lid on it. (I'd be more sympathetic to her if she had not repeatedly been accused of insulting and intimidating women who were victims of her husband's sexual assaults!)

Of course, young people today are far more free about announcing their sexual identities (even when confused, like so many self-styled “transgenders” and “genderqueers”) and their sexual preferences. So maybe should he get the nomination, young Rubio non-chalantly will go on the Ellen DeGeneres show and say, “Sure, I was gay or bisexual as a young man. Yes, maybe I was being hypocritical for being against gay marriage. What the hey!!  Be free, do your thing!”  But I’m not holding my breath...
Posted by CarolMooreReport at 1:42 AM