Putin on US Imperialism at the United Nations 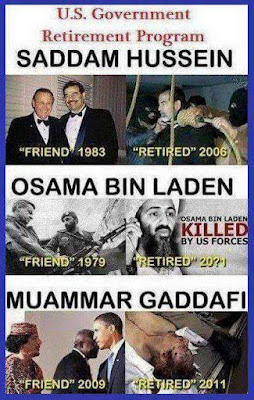 Finally got around to reading Russian President Vladimir Putin's speech September 28th speech at the United Nations.  His analysis of US imperialism was spot on. That doesn't mean I necessarily support all actions of the Russian government, of course, which is just another state. But the world heard what Putin said - which is why the US is trying to figure out how to retire him next (aka "regime change"). Unfortunately tens of millions of Americans who need to hear it did not... Selected quotes below...

...When the U.N. was established, its founders did not in the least think that there would always be unanimity. The mission of the organization is to seek and reach compromises, and its strength comes from taking different views and opinions into consideration. Decisions debated within the U.N. are either taken as resolutions or not. As diplomats say, they either pass or do not pass.

Whatever actions any state might take bypassing this procedure are illegitimate. They run counter to the charter and defy international law. We all know that after the end of the Cold War — everyone is aware of that — a single center of domination emerged in the world, and then those who found themselves at the top of the pyramid were tempted to think that if they were strong and exceptional, they knew better and they did not have to reckon with the U.N., which, instead of [acting to] automatically authorize and legitimize the necessary decisions, often creates obstacles or, in other words, stands in the way...

... They could lead to a collapse of the entire architecture of international organizations, and then indeed there would be no other rules left but the rule of force.

We would get a world dominated by selfishness rather than collective work, a world increasingly characterized by dictate rather than equality. There would be less of a chain of democracy and freedom, and that would be a world where true independent states would be replaced by an ever-growing number of de facto protectorates and externally controlled territories.

What is the state sovereignty, after all, that has been mentioned by our colleagues here? It is basically about freedom and the right to choose freely one's own future for every person, nation and state. By the way, dear colleagues, the same holds true of the question of the so-called legitimacy of state authority. One should not play with or manipulate words.

Every term in international law and international affairs should be clear, transparent and have uniformly understood criteria. We are all different, and we should respect that. No one has to conform to a single development model that someone has once and for all recognized as the only right one. We should all remember what our past has taught us.

We also remember certain episodes from the history of the Soviet Union. Social experiments for export, attempts to push for changes within other countries based on ideological preferences, often led to tragic consequences and to degradation rather than progress.

It seemed, however, that far from learning from others' mistakes, everyone just keeps repeating them, and so the export of revolutions, this time of so-called democratic ones, continues. It would suffice to look at the situation in the Middle East and North Africa, as has been mentioned by previous speakers. Certainly political and social problems in this region have been piling up for a long time, and people there wish for changes naturally.

But how did it actually turn out? Rather than bringing about reforms, an aggressive foreign interference has resulted in a brazen destruction of national institutions and the lifestyle itself. Instead of the triumph of democracy and progress, we got violence, poverty and social disaster. Nobody cares a bit about human rights, including the right to life.

I cannot help asking those who have caused the situation, do you realize now what you've done? But I am afraid no one is going to answer that. Indeed, policies based on self-conceit and belief in one's exceptionality and impunity have never been abandoned.

It is now obvious that the power vacuum created in some countries of the Middle East and North Africa through the emergence of anarchy areas,  which immediately started to be filled with extremists and terrorists.

Tens of thousands of militants are fighting under the banners of the so-called Islamic State. Its ranks include former Iraqi servicemen who were thrown out into the street after the invasion of Iraq in 2003. Many recruits also come from Libya, a country whose statehood was destroyed as a result of a gross violation of the U.N. Security Council Resolution 1973. And now, the ranks of radicals are being joined by the members of the so-called moderate Syrian opposition supported by the Western countries.

First, they are armed and trained and then they defect to the so-called Islamic State. Besides, the Islamic State itself did not just come from nowhere. It was also initially forged as a tool against undesirable secular regimes.

Having established a foothold in Iraq and Syria, the Islamic State has begun actively expanding to other regions. It is seeking dominance in the Islamic world. And not only there, and its plans go further than that. The situation is more than dangerous.

In these circumstances, it is hypocritical and irresponsible to make loud declarations about the threat of international terrorism while turning a blind eye to the channels of financing and supporting terrorists, including the process of trafficking and illicit trade in oil and arms. It would be equally irresponsible to try to manipulate extremist groups and place them at one's service in order to achieve one's own political goals in the hope of later dealing with them or, in other words, liquidating them.

To those who do so, I would like to say — dear sirs, no doubt you are dealing with rough and cruel people, but they're in no way primitive or silly. They are just as clever as you are, and you never know who is manipulating whom. And the recent data on arms transferred to this most moderate opposition is the best proof of it.

We believe that any attempts to play games with terrorists, let alone to arm them, are not just short-sighted, but fire hazardous (ph). This may result in the global terrorist threat increasing dramatically and engulfing new regions, especially given that Islamic State camps train militants from many countries, including the European countries.... 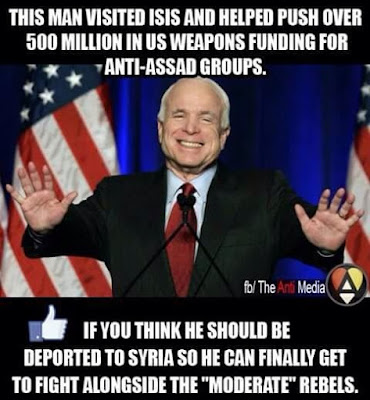 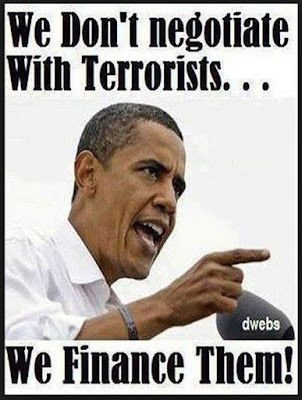 Here's a good article linked from Antiwar.com. It's drawn from a new book about US funding of ISIS...
Posted by CarolMooreReport at 12:46 AM