April 12th is the 150th anniversary of the first battle of the U.S. Civil War, the attack on Fort Sumter. Of course, this was a civil war mostly about states rights to impose slavery - plus several other lesser complaints about the federal government. 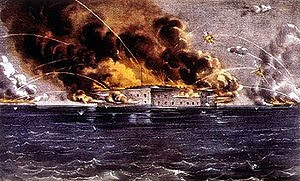 Future secessionist efforts by states, regions, counties, cities will be about getting out from under the slavery imposed by an authoritarian central government that thinks it has the right to commandeer our monies and our lives to serve the ends of rich and/or well organized special interests, in and out of government. Now some secessionists DO have delusions that they will be able to impose their particular political, economic, religious, cultural or other views on the newly independent entities. And foolish or wicked people always will follow corrupt leaders - from ideologues to kleptocrats - who woo them with demagoguery or bribes. The price of liberty is eternal vigilance - and political processes which can insure such liberty survives.

See my relevant articles listed at Secession.net. And check out my recent Youtube talk on the subject as described at this blog entry. And see amusing video below.

Update - Other commentary of interest on today's anniversary: A CNN poll found that 67 percent of Americans support the North over the South in the Civil War. Meanwhile 53 percent think slavery was the main reason the south seceded and 42 percent do not.

Of course, how does one define main reason? Given variety of individual and state motives, amount of publicity given various issues, and political spin given to the whole war afterward, and especially by the victors, it's not a topic for scientific exactitude.

Lew Rockwell today makes the point that people are taught in school and via media that the ONLY reason for secession was slavery and the abolitionist Lincoln had to fight the war primarily to free the slaves. Rockwell provides various evidence that that interpretation is propaganda. So it's interesting that CNN asked the question and got various answers.

John Blake writing at CNN lists four reasons that "we're still fighting the Civil War" - i.e., parallels to that time: The disappearance of the political center; How much power should the federal government have? (Nullification, states' rights and secession are issues once again); Unleashing the dogs of war (Civil war lasted longer than expected, like Iraq and Afghanistan); The president as dictator (Obama seen as one, just as Lincoln was - and both usurped power).

Posted by CarolMooreReport at 11:14 AM

The disappearance of the political center; How much power should the federal government have? (Nullification, states' rights and secession are issues once again);

In other words, you basically agree with my opinion here :-)