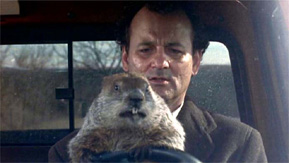 Last week I watched Bill Murray's 1993 comedy Groundhog Day (buy movie) for the first time in a couple years. I was reminded it was one of my favorite movies -- and why.
.
In the movie, Murray is a selfish, egocentric television reporter named Phil Conners (as in conman?) sent to cover the February 2nd “Groundhog Day” celebration in Punxsutawney, Pennsylvania. (I watched the actual celebration on television this morning!)
.
After an annoying day where snow forces him to sleep over at a local inn, he awakens to the sound of Sonny and Cher’s "I got you, babe!" on the clock radio. He discovers to his horror that once again it is February 2, Groundhog Day - that day, and every day thereafter, over and over again.
.
Once Phil realizes what is happening, he uses the strange phenomena to scam his way into women's pants by learning their likes one day, and pretending he knows the women or shares their likes when the day repeats. Phil also learns a host of impressive new skills, from ice sculpting to piano playing. These tactics finally work on his colleague Rita, who he begins to fall for. But the next day, she doesn't remember a thing and he has to start from scratch.
.
Phil soon tires of his games - and this repeating life in general - so he tries to commit suicide. He suceeds, over and over again, in dozens of increasingly gruesome ways, always waking up the next morning alive and listening to Sonny and Cher. Bill Murray pulls these many vignettes off with his usual comic brilliance.
.
Eventually Phil decides to try being helpful to others and learns to approach Rita with true affection. When finally he learns to love, he wakes up to February 3rd.
.
The movie's theme - whether the writers realized it or not - is learning new lessons through reincarnation. Reincarnation is the process by which organized consciousness survives death and eventually passes on into a newly born infant. See my short article on Dr. Wambach & Reincarnation. Wambach did some of the most credible and detailed research using past-life regression to discover evidence of reincarnation.
.
As a practitioner of self-hypnosis, I found it easy to access past live memories the first time I tried it in the mid-1970s. Low and behold, I discovered I had been an American soldier killed in World War II and the wife of an American soldier in the Civil War. HMMMM. Wonder if that could have anything to do with my anti-war, pro-peace obsessions??
.
When watching Phil trying to kill himself, it occurred to me that this definitely is the stage at which too many males - and the dominant patriarchal culture they have created worldwide - have remained stuck for a couple thousand years. They are more skilled in the arts of conning and killing than the arts of loving. And now they have the nukes to kill all the many people they hate! (Today that means especially Arabs and Muslims, in a great surge of Judeo-Christian hatred and bigotry.)
.
If more people realized that “you only live once” is one more bogus concept, if they realized you do in fact live over and over again, they might be more careful of the world they are creating. Because they will be born into it again. So if you are rich, white and male and think, like Phil Conners, you are getting away with something, just wait to see what the odds are you’ll come back in the next life poor, female and a person of color. I’d say 49 out of 50.
.
Somebody tell that to Dick Cheney and Donald Rumsfeld, who have been accused of running their OWN version of Groundhog Day with the wars they promoted when they held various reins of power during FOUR Republican administrations (Nixon, Reagan, Bush I and Bush II.) WHEN WILL THIS NIGHTMARE END? And how? 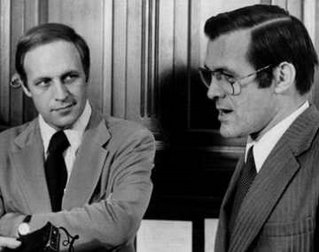 Posted by CarolMooreReport at 1:27 PM

Groundhog Day is indeed one of that movies that just gets better every time you watch it .. I normally can't stand Andie McDowell, but Bill is so great in this one that she's only a minor annoyance