2006 was a bad year for the Israel Lobby. Instead of lions and tigers and bears, they've been scared silly by Professors Walt and Mearsheimer's "Harvard paper" - soon to be published in book form - "The Israel Lobby and U.S. Foreign Policy." They've been mocked by the very title of Jimmy Carter's new book "Palestine: Peace or Apartheid," not to mention its highly critical contents.
.
And let's not forget this recent revelation from former U.S. senator James Abourezk who wrote in a December 11, 2006 letter distributed by the Council for the National Interest, of which he is vice chair: I can tell you from personal experience that the support Israel has in the Congress is based completely on political fear -- fear of defeat by anyone who does not do what Israel wants done. I can also tell you that very few members of Congress -- at least when I served there -- have any affection for Israel or for its Lobby. What they have is contempt, but it is silenced by fear of being found out exactly how they feel. I've heard too many cloakroom conversations in which members of the Senate will voice their bitter feelings about how they're pushed around by the Lobby to think otherwise. In private one hears the dislike of Israel and the tactics of the Lobby, but not one of them is willing to risk the Lobby's animosity by making their feelings public.
.
Anyone who signs up for an "Israel Lobby" Google Alert will be overwhelmed with critical news stories and carping bloggers - some of them carping about all the "anti-Semites" carping about the Israel Lobby's undue influence.
.
Meanwhile, I'm still videoing and youtubing street protests in D.C., despite recent upload and conversion problems. (Send me thousands of dollars so I can hire a tech!) On December 2nd 100 of us rallied against the brutal Israeli Siege of Gaza. See video.
.
And on December 8th 50 of us protested Israeli minister and ethnic cleanser Avigdor Lieberman. See the video. He was appearing with both Bill and Hillary Clinton at a private conference sponsored by the Saban Institute, which was created as part of the Brookings Institute a few years back, endowed by wealthy Israeli-American Haim Saban. Saban is quoted as saying: "I'm a one-issue guy and my issue is Israel". He recently bought the largest Latino media conglomerate Univision. Guess he doesn't want any uppity Latino news people criticizing his favorite nation state, brave little Israel.
.
Speaking of Israel, there was NOT too much talk at the recent DC 9-11 protest about Mossad agents' advance knowledge of the September 11th attacks, of hundreds of Israeli agents being kicked out of the country after 9-11, or even Mossad complicity with Israeli leader Bibi Netanyahu's good friend Larry Silverstein, owner of the lease on the Twin Towers and of Building Number 7th, all of which collapsed that day. See Justin Raimondo's writings on the first. See the Fox News story and video on the second. And search the Internet for information on the third - always being careful of your sources since there are real anti-Semites out there, not just rabid critics of Israeli state crimes. This story is a good overview.
.
Webster Tarpley, who just spoke at the December 16th "Boston Tea Party" shredding party in front of the White House, has written that there doubtless is some complicity, but does not focus on it because he want to allow the American culprits off the hook. Check out the video. Others like Daniel Abrahamson of FalseFlagNews.Com are more assertive in taking on the issue. Other 9-11 "conspiracy theorists" admit being afraid the movement will be "discredited" if it is seen as "anti-semitic." (Of course, many of the same people will freely speculate that no planes hit the World Trade Towers and it was all televised video manipulations!)
.
The 9-11 movement is the first I've heard to use the phrase "left wing gatekeepers" for those like Counterpunch.Org who debunk many of their theories. But when it comes to Israeli involvement, many of them are keeping their own gates firmly closed. Nevertheless, they are doing a good job reminding people how the U.S. and other governments will stage provocations to war and blame them on their adversaries. Something we probably will see in the next few months against Iran. Don't buy it!! We must fight the Israel Lobby -- and all the other nefarious special interests -- even harder in 2007 than we did in 2006. Our very survival may depend on it. 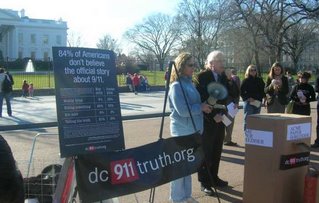 Posted by CarolMooreReport at 6:44 AM