Professor Jorge Hirsch, a UC San Diego Physicist very concerned about the possibility the U.S. will use nuclear weapons against Iran writes for Antiwar.Com, among other sites. I met him this spring when he delivered a letter from nuclear physicists to George Bush at the White House.
.
He recently wrote Nuking Iran is Not Off The Table. InformationClearingHouse.Info just published an incendiary sounding article Nuke Iran, Blame the Jews: Who Benefits from the Israel-Lebanon Flare-Up?
.
The first paragraph reads: Members of the Jewish faith and others correctly point out that Jews are often blamed for the sins of others. They may be about to be proven right again, in a big way. The current conflict may escalate to the point where the US will use nuclear weapons against Iran, in what will be the first use of nuclear weapons in war since Nagasaki. And the world will blame it on the Jews.
.
He goes on to make the important point: The reality is that, whether one ascribes to Iran evil or benign intentions, Iran draws no benefit whatsoever from the current turmoil in Lebanon. Neither does Syria. Consequently the rhetoric from the US and Israel suggests a deliberate attempt to draw Syria and Iran into the conflict.
.
He continues: In the short term, Israel certainly will benefit from the destruction of Iran's military capabilities. But Israel will not enjoy peace as a result, because the nuking of Iran will create enormous animosity against Israel in the Muslim world and beyond. To the extent that the world buys the US fable that the nuking of Iran was required by "military necessity" and not premeditated, Israel (and Jews worldwide) will bear a heavier than deserved brunt for having contributed to "precipitate" these events.
.
In this last paragraphs he writes: In the end of course we will all lose. Because the nuclear genie, unleashed from its bottle in the war against Iran, will never retreat. And just like the US could develop nuclear weapons in only 4 years with completely new technology 60 years ago, many more countries and groups will be highly motivated to do it in the coming years...As the nuclear holocaust unfolds, some will remember the Lebanon conflict and subsequent Iran war and blame it all on the Jews.
.
My two comments on this excellent article are:
.
1) Prof. Hirsch is overly optimistic in not recognizing that a US nuclear attack on Iran itself probably will spiral out of control to world nuclear war. What might paranoid Russian military leaders do seeing nuclear armed planes and missiles approaching just a few hundred miles from its border? What happens if the radiation spreads over Russia, even as more bombs are on the way? Will panicked Russian leaders launch massive retaliation against the U.S.?
.
2) The most extreme pro-Israel Jewish and gentile leaders, private and elected, who are promoting this war in the United States should be held fully accountable and their names should go down in a historical hall of shame: American Enterprise Institute, William Kristol, Richard Perle, Newt Gingrich, American Israel Public Affairs Committee, American Jewish Congress, Christians United for Israel, Anti-Defamation League, Fox News, CNN, ABC, CBS, NBC, Washington Post, New York Times, etc. Bush and Cheney and Olmert are just the tip of a very dirty iceberg.
.
As for all those Americans and Europeans and Israelis who just went about their business trying to forget that such a war could happen, what can we do but PITY THE FOOLS. Of course, some of those who survive, out there in the American or Russian or European boonies, who come looking for scapegoats probably will not curse the gentiles first. Professor Hirsch has that one hundred percent correct.
.
See a YouTube video of Prof. Hirsch speaking on the topic of a U.S. nuclear attack on Iran. 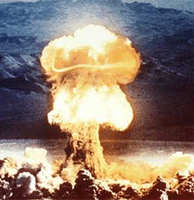 Posted by CarolMooreReport at 2:51 PM

If the US were to go nuclear, it wouldn't just be one bomb.

The US would devistate the middle east, forget OIL.

And it wouldn't just go after the ME. US has many enemies, and the destruction would be unimaginably complete.