Despite Heat, Dragging Old Body Out To Protest

Don't get to be 58 years old, and 40 lbs overweight, kids... Meanwhile, see new video of inspiring July 25 400 person protest at the Israeli Embassy (photo above) and the 30 person (and one giant pink Blair balloon poodle) during Tony Blair's July 28 visit to White House on my YouTube.com page. (Photo below.) Getting more creative with sound effects as you shall see.
.
Of course, between protesting, making videos, and blogging, I haven't been engaging in as many GIANT SPAMS as usual to get the word out about all this. Make sure you are on my spam list! endviolence (at) carolmoore.net
.
Another big Arab-led protest today at State Department -- and there's supposed to be C.D. Thursday night went to Arab Anti-Discrimination Committee (ADC) and American Arab Institute event on Lebanon where people were quite depressed and disempowered. People chimed in with ideas during discussion. After hearing that even many Arab American citizens felt fearful of political action or protest, I reminded them: "When Gandhi first got to South Africa he was thrown off a train for riding first class and discovered he was a third class citizen of the Empire. What did he do? He went right out and started doing civil disobedience. Maybe that's what Arabs and Muslims in this country should to do."
.
Late Sunday night I got the announcement that ADC and others are doing a protest and CIVIL DISOBEDIENCE at the State Department this a.m. It was some of the usual suspect Arab and other progressives, but nevertheless great minds think alike! Will report on that... 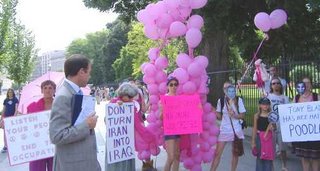 Posted by CarolMooreReport at 9:44 AM