Read an infuriating article from University of Pennsylvania student newsletter whining about "'Women are being erased' under Trump" - when they made it quite clear they were big supporters of the transgender movement which has relentlessly tried to erase women born as women. Just sharing this edited version of my ranting reply to keep the blog alive. (Wonder if the snowflakes will delete it.) I'll even link from FB (aka freaking facebook - bleah, crappy archiving for compulsive archivists.)  Enjoy... Plus a few memes for emphasis.

This article would be humorous if it wasn't so sad.  Because of transgender ideologues physicians can't say "mother" or "breastfeeding" in England any more - how long before here?; pro-choice women mentioning vaginas or wearing pink pussy hats or carrying "don't tread on my uterus" graphics are called "transphobic"; abortion clinics become womens clinics; and women's clinics become what - all gender clinics?

Women who dare to note that women born as women, their experiences as well as their natural bodies, are being erased are called TERFs (Trans exclusionary radical feminists). That acronym often is used in the insult/threat "DIE, TERF, DIE" delivered over the last few years to thousands of women online. Women who hold forums just to discuss these issues in the most sympathetic and inclusionary manner are shouted down until police remove the offenders. A new woman’s library in Canada was invaded and property destroyed on its opening night just because one of the founders had criticized transgender ideology; protesters called for removal of books that had nothing to do with transgenderism which they obviously hadn't read. Police had to be called. 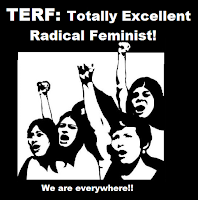 And let's not forget the erasure of gay men and lesbian woman, i.e., all of them who now are being called transgender at an early age and rushed into hormone therapy, before they figure out - "Oh, I'm really gay."  Too many parents may prefer transgender children to gay or lesbian ones! Or are gays and lesbians no longer part of the "intersectionality" philosophy??

If one woman on that panel had dared to mention even one of these factoids she would have been shouted down and probably asked to leave the stage.  How many good Democratic women were too disgusted to vote for Hillary because of her support for confused little boys sharing shower rooms with their daughters or any convicted sex offender who claims to be a woman following them into a big box store woman's rest room?  My guess is it was AT LEAST 80,000 in the four usually democratic states that Trump one by 78,000 votes.

When I was in college in the sixties we had a lot of ideas about peace and love and transcending sex stereotypes and building community, ones many of us still have today. And we were on the lookout to make sure the future 1984 was not like the book “1984". 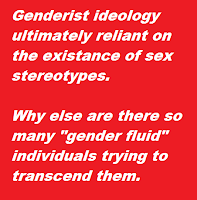 I'm sad to see today's college kids are about "diversity of tactics" and attacking anyone whose ideas are a smidgen different and reinforcing sexual stereotypes through hormone treatments of 7 year olds and making sure only your community counts and the rest are policed by federal law and jackbooted thugs to make sure they are politically correct.

Don't worry, it's not your fault. It's the fault of all the power hungry bureaucrats out to win big paychecks, promotions, perks and pensions by manipulating your lives with whatever ideology screws with people's minds the most.  And they finally have found it - instead of "1984" it is "2017."  "War is peace" and "men with penises can be women".  What a collapse in morality, culture and common sense.

Soon you’ll be out of college and realize that your future already has been mortgaged to pay for baby boomers social security and medicare. (In 3 years I’ve already collected about 8 times more than I put in and I’ve got healthy genes and expect to live another 20 years.) So if you don’t want to be slaves paying 2/3 to 3/4 of your income in taxes for war and elder care, sharing an apartment with 3 roomies, and no hope of having your own kids, you better start looking at reality and stop listening to tenured professors who are little more than mind-f*cking government bureaucrats. 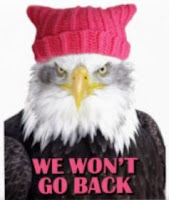 There is an alternative, one many of us discovered when reading Paul Goodman's "Communitas" and Kirkpatrick Sale's "Human Scale." It is radical political decentralization and destruction of the centralized governments that are our real oppressors, bringing war, poverty and oppression.

Right now all you are doing is serving bureaucrats and a state that couldn’t care less if they destroy you. Stop wasting your time on divisive intersectionality and put your efforts into fighting for EVERYONE's freedom.

Posted by CarolMooreReport at 12:28 PM