Five weeks of defending women against the state!

From my last post, you can see I am very concerned with the issue of womens' safety and freedom in private and public spaces.  Yup, I get REAL hepped up on those issues, almost as much as on nuclear war - which is the ultimate way our overwhelmingly male masters threaten the lives of women and children, as well as their own sex.

Soon after the last post I discovered that going into the 2016 Libertarian Party convention the LP platform committee had voted for removal of the plank reading since 2006:


“Recognizing that abortion is a sensitive issue and that people can hold good-faith views on all sides, we believe that government should be kept out of the matter, leaving the question to each person for their conscientious consideration.“

The platform plank USED to be a lot more hard core, but the abortion prohibitionists, in league with the vote grubbing libertarian-lite types, have been relentless in watering down the plank and trying to get rid of it.  After learning that, I then noted that the LP Radical Caucus was being overly influenced by one or more anti-abortion types who want to get rid of the plank. And thus their decisions to not take a position on the plank actually looked anti-plank -- and not at all radical.

That was enough to set off the Pro-Choice Fanatic in me. I've kept a meager website for our old group for years, but in last weeks I have:
* Beefed up http://pro-choicelibertarians.net with Wordpress. (Yup, got much better at Wordpress with this effort. Yay!)  See the "Our History" page for Carol and others activism over almost 30 years on the issue in the LP.
* Started a Facebook page for pro-choice libertarians only.
* Started a Pro-Choice Libertarians twitter feet. http://twitter.com/ProChoiceLibs
* Been making lots of fun buttons and memes. See graphics of just a few below.
* Our group got hundreds of buttons and leaflets out at the convention to make it clear we are back and we are proud and intending to kick prohibitionist butt!
* And I made lots of new contacts enthusiastic about my next project: updating Secession.net.

Governor Gary Johnson - who just has been named the Presidential candidate - is pro-choice. (He got 1.3 million votes in 2012 as the LP candidate.) This is his issues statement on abortion below. Libertarians would be quite angry if he started promoting some of his former positions. (SPACE TO COMMENT ON VP CANDIDATE ONCE CHOSEN A LITTLE BIT LATER).


Abortion and the Right to Life

Gary Johnson has the utmost respect for the deeply-held convictions of those on both sides of the abortion issue. It is an intensely personal question, and one that government is ill-equipped to answer.
As Governor, Johnson never advocated abortion or taxpayer funding of it. However, Gov. Johnson recognizes that the right of a woman to choose is the law of the land today, and has been for several decades. That right must be respected, and ultimately he believes this is a very personal and individual decision. He feels that each woman must be allowed to make decisions about her own health and well-being.
Further, Gov. Johnson feels strongly that women seeking to exercise their legal right must not be subjected to persecution or denied access to health services by politicians in Washington or elsewhere who are insistent on politicizing such an intensely personal and serious issue. As Governor Johnson did support a ban on late term abortions.

I'll let the website and the graphics below tell a few more "thousand words" about my recent activities. 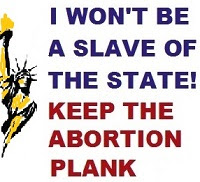 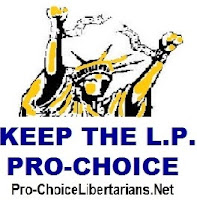 And of course, I had to give hell to those ABORTION PROHIBITIONISTS who pop up and yell baby killer, talking about their "consciences". 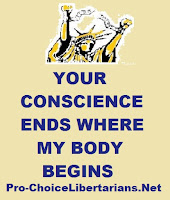 The only real ABORTION PROHIBITIONIST candidate was first runner-up AUSTIN PETERSEN who DOES talk a really good libertarian line on most issues, except abortion (really bad) and foreign policy (too often pro-war sounding). He has an interesting libertarian-ish resume as well as lots of appearances on (neocon) Fox News. He has lots of young followers, many of whom are pro-choice. 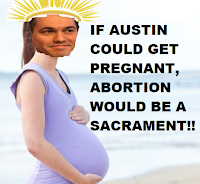 Posted by CarolMooreReport at 2:53 PM

Reading the platforms, Prohibition Party religious fanatics that infiltrated the Republican Party in the 1920s to enforce bans on beer, condoms, diaphragms, abortion and health inspections have branched into three more additional and functionally identical parties. Read the women-affecting platforms of the Prohibition, Tea and "Constitution" parties and you'll see. Austin Petersen is by my lights an entering wedge for the very religious totalitarianism the Liberal Party was organized to combat in 1930. Four dummy political parties dedicated to having men with guns coerce physicians and women may seem natural in the Ottoman Empire, but not These States. The LP needs to adopt a pro-choice platform to divert these tentacles toward the parties they themselves have emasculated.