When demagogues team up

Watched a bit of Donald Trump and Ted Cruz speaking at the Tea Party rally (on TV, of course, even though it was just a couple miles from my home).  How they yelped their lies about the Iran nuclear deal.  They won't admit the deal actually was forced on Iran with even Nobel Peace Prize winner Obama and Vietnam War protester Kerry threatening: "we won't bomb the heck out of you and kill a million plus of your people and starve the rest if you agree to a more strenuous oversight of your nuclear program than any other nation which has joined in International Atomic Agency regime. (Of course, we won't admit our buddies in Israel never joined it and have 400+ nukes that they've threatened to use against our other allies and Russia...)"

And of course how could any savvy person not see that two demagogues Cruz-Trump were slapping each others' backs at  the rally.  Must have been like when Stalin met Hitler in the late 1930s and agreed to carve up Poland, except they were doing it publicly on TV, not in a private room. (That's a Stalinist mustache, FYI.)

I'm happy to say that a quick search showed lots of bloggers and minor personalities have written about either or both being demagogues. Luckily Trump-Cruz are only part Irish, so their racist demagoguery can be blamed more on Cruz' white Latino heritage (which has oppressed black and native Indian peoples through out Central and South America for 500+ years) and Trump's inborn feelings of Germanic supremacy.

I read quite an interesting article on the topic that explained a lot about demagoguery. (Just ignore the stuff about neoliberalism, which is just the flip side of neoconservativism, in that the libertarian aspects of both philosophies have been co-opted by statists). Henry A. Giroux in Donald Trump and the Ghost of Totalitarianism at the Tikkun web site wrote:


Missing from the commentaries by most of the mainstream media regarding the current rise of Trumpism is any historical context that would offer a critical account of the ideological and political disorder plaguing the American society—personified by Trump’s popularity. A resurrection of historical memory in this moment could provide important lessons regarding the present crisis, particularly the long tradition of racism, white supremacy, exceptionalism, war mongering, and extended wars on youth, women, and immigrants. Calling Trump a fascist is not enough. What is necessary are analyses in which the seeds of totalitarianism are made visible in Trump’s discourse and policy measures...Few journalists have acknowledged the presence of  white militia and white supremacists groups at his rallies and almost none have acknowledged the chanting of “white power” at some of his rallies which would surely signal not only Trump’s connections to a racist past but also to the formative Nazi culture that gave rise to genocide....This is a discourse in which totalitarian images of the hero, fearless leader, and bold politicians get lost in the affective and ideological registers of what Hannah Arendt once called “the ruin of our categories of thought and standards of judgment.”[5]  Of course, there are many factors currently contributing to this production of ignorance and the lobotomizing of individual and collective agency.


Trump represents a frightening trend of convenient racism rooted in a belief that America was great before ethnic and racial minorities, women, and sexual minorities wanted equal rights. (What Trump calls “political correctness.”)...in my research I have attended numerous Klan rallies, skinhead gatherings, and meetings of the Aryan Nations, and the rhetoric is almost exactly the same as Trump’s. I was at a Klan Rally in Covington, Georgia in 1991 in which a Klan leader told the small crowd the story of a white woman who had been raped and beaten by an “illegal Mexican.” As with Trump’s story, whether it was true or not didn’t matter. It served to whip the racists into a frenzy.

I remain confidant that Trump will implode at some point.  Someone important will stand up to him in such a way that even the media has to admit what Blazak writes: "Obviously, Trump is a clown who will say anything that feeds his narcissism."  And Trump will storm off the stage.  (Or maybe he'll have his Rick Perry gotcha moment on some factoid that even his bravado can't gloss over.) I'm quite sure Cruz hopes to pick up all those Trump voters.

Hopefully we will escape electing a true demagogue in 2016. But then George W. Bush was elected on a platform of more freedom, less government spending and a humble foreign policy and look what we got.  So even a saner seeming Kasich or whatever Democrat replaces the faltering Hillary may turn out to be the dictator so many of us have been expected will employ jack booted thugs to take us away to the camps.

In case you forget how far we've come since 2001 on the path to giving a warmongering dictator complete power, read  Tom Engelhardt’s “Mantra for 9/11: Exceptional Pain Dispensed by the Indispensable Nation." He writes:

Well, enough. I'm focusing now on promoting specific political alternatives and spiritual views, if I can ever get Wordpress and my new html editor working right!  At least I have an easy new backup music program and have been whipping out new political songs to be put up soon at Youtube/Carolmooresongs.  But at 67 the old fingers and bones and brains just don't work as fast as they used to. But the voice is still strong!

Just one more note - on the new Steven Colbert show. I never was much into Steven Colbert or David Letterman (preferring the rambunctious Jay Leno who is closer to my personality type). However, I did watch his first show on CBS out of random curiosity.  Despite a few funny bits, I was not impressed.

However, I was impressed that Colbert actually DID seem nervous about the sight of CBS president Leslie Moonves sitting there with a button that would turn his 11:30 pm slot back to reruns of my favorite psychic detective "The Mentalist." And just now I've read in the sometimes accurate Wikipedia that Moonves is  "a great-nephew of David Ben-Gurion, the first Prime Minister of Israel." So Colbert knows he better not do anything to rock the US/Israel imperialist boat.  I watched the second night to see if Colbert would rock any boats at all. I was mainly impressed that he was far less nervous and funnier on his secondnight. But his long story about all the technical difficulties that almost kept his show off the air the first night really makes one wonder just how much pressure he is getting.

At least Colbert did make the graphic dig at Trump below.  But he also interviewed the neocons' best hope, the incredibly naive Bush Boy II, "Jeb!" Seeing Jeb!'s list of foreign policy advisors, it's likely he too will be pushed into another horrific war - against Iran, of course.

Strangely, Colbert cut from his first show Jeb!'s rather amusing and mocking impressions of Trump. Other news outlets noted that and played them. (Will link if I find them.)  Colbert even sheepishly admitted it on his second show.  Yes, it's interesting to watch the dictatorship unfold by watching Steven Colbert squirm under the thumb of really big corporate state fascist imperialist America.  Maybe he too wonders when he'll get dragged off to the camps... 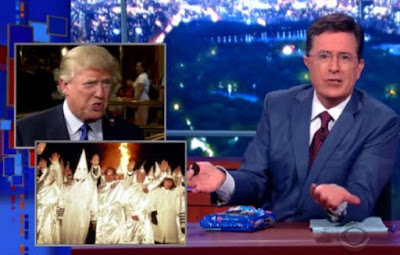 UPDATE 9/17/15:  I don't want to dignify Trump (or his also ran buddy Cruz) by writing much more about them. But I will quote what Rand Paul had to say, drawn from this NY Times Op-Ed written by a very disgusted Frank Bruni, "An Overdose of Donald Trump at the G.O.P. Debate":


...Rand Paul took the precise measure of — and raised the correct question about — the egomaniacal front-runner.

“I think really there’s a sophomoric quality that is entertaining about Mr. Trump, but I am worried,” he added, and I nodded so vigorously at the “worried” part that I’m going to need balm and a neck brace tomorrow.

Paul went on to single out Trump’s “visceral response to attack people on their appearance — short, tall, fat, ugly. My goodness, that happened in junior high. Are we not way above that?”

No, we aren’t. Or at least Trump isn’t. And “junior high” is too easy on him, too kind. Trump comes from, and belongs in, the sandbox, as he demonstrated the second that Paul paused and Trump fired back: “I never attacked him on his look, and believe me, there’s plenty of subject matter right there.”

Several pundits have noted the similar facial features of the mostly Irish, part German, Senator Joseph McCarthy of 1950s infamy and the part Irish Ted Cruz.  McCarthy under took an unnecessarily persecutory jihad against suspected Communists and ex-Communists in government and other influential fields. And there were quite a few, given that the during the Great Depression many people foolishly thought Communism was the solution to poverty. (And he was right that there were lots of real live Soviet Firster infiltrators as well, as subsequent government releases and academic scholarship has shown.)  But even most anti-communists feel he hurt the cause of exposing the small number of truly dangerous individuals.  (And we're still waiting to see a polite bu thorough investigation of the undue influence of foreign governments in today's government!)

McCarthy was the Donald Trump of his age, gaining massive national attention with his hearings and allegations and obnoxious antics.  McCarthy at least had some minimal factual grounding to his overblown tirades.  With Trump it's all about purely subjective ego and narcissism and the deep need to persecute anyone who isn't good looking and rich enough - unless they adore and follow him unquestionably, that is.

We can only hope that Trump eventually earns the same reputation McCarthy earned for himself. He deserves it. If not, get ready for the demogogues who will take over in the future, be they named Trump or Cruz or Petraeus or some other minor character waiting in the wings with the flare for attention that makes people listen and obey.  Of course, if they listen and take only the most high consciousness suggestions and leave the rest, that's another story... 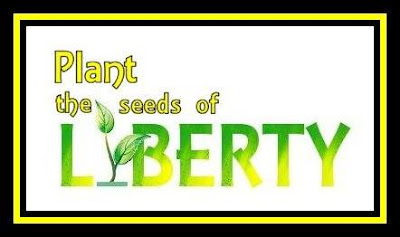 Posted by CarolMooreReport at 1:42 AM