Obama sticks it to a kid... 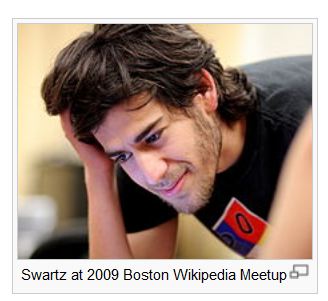 It was sad to hear that 26 year old internet activist Aaron Swartz committed suicide, depressed because the feds were threatening him with 30 years in prison for downloading quasi-public information.  I'd seen him a few times on RT TV (aka Russia Today) and he seemed like a sincere guy.  But that didn't stop one of Obama's prosecutors, Carmen Ortiz from pressing "Computer Fraud and Abuse Act" charges that could have resulted in a 35 year prison term under mandatory sentencing. She claims that she offered to make a deal and he'd only serve six to eight months  - or even no time, if the judge so decided. But who can trust prosecutors and judges in this day and age of making an example of anyone who associates with or even just defends whistleblowers or Wikileaks types. According to a video embedded by the "Palestinian Pundit" Swartz was "a Fighter Against the Privatization of Knowledge."

So here we are coming up to the four year anniversary of Obama's inauguration and what has he got to show for it. Well,  he DID resist pressure to invade Iran - so far, even if he hasn't freed Palestine, per my requests below. And he put up Chuck Hagel for defense (hopefully) who did a great job lying to Senator Chuck "Israel first" Schumer about how he didn't really mean it that he put American interests before Israel's. (Update: and did Schumer get rewarded for falling for it by getting high profile speaking spots at the inauguration and the later brunch?? Time will tell...)
But Obama shot down all those post-election petitions to "let our state secede." And he probably will prosecute pot smokers in states that have made it more legal. And then there's what we never imagined...he's assumed dictatorial powers to kill anybody he deigns a terrorist.
I guess Adam was on the top of the list, even if it only was through persecution as opposed to direct execution.  Gosh, I gotta get famous being another nonviolent revolutionary so I can get on the list... Here's the overly optimistic video I made when Obama was inaugurated.

Posted by CarolMooreReport at 9:04 PM