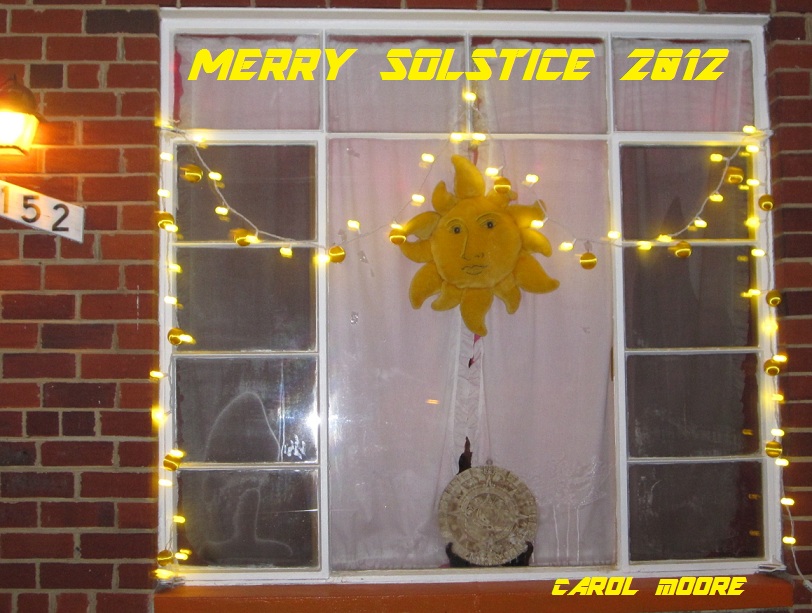 And yes that IS a Mayan Calendar in my window!

I can't put off commenting on the impending Solstice of December, 2012.  After all I've seen the movie "2012" at least five times!  Tonight I was watching a couple scary "documentaries" about the various apocalyptic theories. And there's nothing like a little fear to rock you consciousness, for better or worse. It will be interesting to see what happens.

It reminds me of the build up to Y2K, which scared me a lot more because of so many articles about how nuclear power plants might melt down or nuclear rockets somehow might be tricked into being launched. Here I am below flashing a peace sign with a bunch of peaceniks in front of the White House December 31, 1999. We were ticking off with the red ribbon in what longitude the year 2000 has just struck.  Luckily, there were no catastrophes that year.

And despite the scare we had last week with TWO asteroids in two days coming really close - the closest one totally unexpected! - I assume we'll be lucky again this time around. Of course, between supervolcanos and asteroids and the occasional massive solar flare, nature will doom humanity, assuming it doesn't doom itself first. But don't worry, life will always return here or elsewhere.

Consciousness, the mind of the universe, cannot help but evolve again and again into intelligent life forms, some surely far more intelligent than testosterone and masculinity besotted humanity.  So Merry Solstice, which should be the beginning of our happy new year! (Enjoy my last year's Merry Solstice video - and my "Here comes the Sun video".)

12/27/12 News Flash! We survived - for now anyway. I did have fun watching the movie "2012" for the 5th or 6th time anyway on the 21st. Well, we'll see if someone somewhere did or said or thought or wrote or decided to write or say or do something that really will raise human consciousness and give us a few thousand years of bliss on the planet before some inevitable cosmic calamity befalls us!
Posted by CarolMooreReport at 12:48 AM

I am an American man, and I have love American women. In a nutshell, American women are the least likely to cheat on you, to divorce you, to get fat, to steal half of your money in the divorce courts, etc. Therefore, what intelligent man would NOT want to get involved with American women?


American men are living in their own pathetic little fantasy world, but with the perfect little princess of an American woman, they will be in paradize. Thanks for all your good work spreading alternatives to male violence and supremacy and ethnic and religious intolerance - I love the sun just like you do!!!