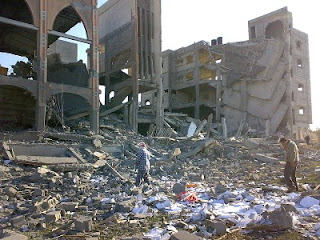 No, that's not Tripoli. It's Gaza, after the 2008-2009 Israeli bombing. While Obama is waxing all indignant about the monster Gaddafi bombing his own people, he continues to support Israel's even more dastardly attacks on the imprisoned people of Gaza for 23 days in 2008-2009, just before he took office. And he had his United Nations representative vote against the Goldstone Report, even though it blamed captive Palestinians as much as it did the Israeli bombers. Just like some people blamed Jews for rebelling against the Nazi Warsaw Ghetto incursion which led to the total destruction of the Ghetto.

But that's what oppressors do when their enslaved people rebel, isn't it? Nazis in Poland, Israel in Gaza, Gaddafi in Tripoli. (Funny how we were taught in the 1960s to learn the lessons of the Holocaust and draw analogies of fascistic behavior by the Nazis; at least until too many of us started pointing out that Israel's behavior towards the Palestinians was much like the years leading up to Nazi policies of total genocide of the Jews.)

Anyway, a reminder video of the devastation below. You can bet the Israel lobby/Neocons are just itching to get the U.S. to bomb another Arab/Muslim country, just to keep it in practice for the big war against Iran they continue to push the U.S. into - as long as China is willing to foot the bill, anyway. 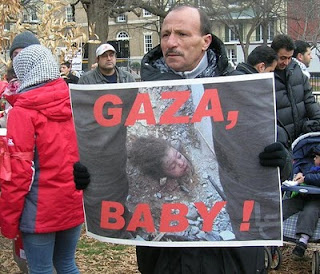 Update: Here's an interesting article from a pretty good leftie source (recommended by a libertarian source) alleging that the main rebel group, which met a few years back in the U.S., may be tools of U.S. imperialism supported because Gaddafi hasn't sufficiently knuckled under to U.S. interests -- even though he's been getting advice from arch-neocon Richard Perle. There's no doubt a bunch of Neocons are saying BOMB BOMB BOMB all over cable Tv.

Posted by CarolMooreReport at 10:34 PM