Well, this is the biggest one for me so far. Proof positive in writing that "confirmed decades of suspicion that Glaspie had, in the meeting, given Saddam Hussein the impression that the United States was giving him the green light for the invasion," as Antiwar.Com puts it. The Actual Cable from Glaspie is here. See also Professor Stephen Walt's analysis. The only mainstream press I found so far was Israel's Haaretz which wishes Obama would give them the green light to bomb the hell out of Iran. Just in case you don't know what all the fuss is about, Dietz writes:

...when Saddam suggests that he might act unilaterally if the talks [i.e., invade Kuwait] didn’t show any progress – indeed Glaspie informs Saddam that “we took no position on these Arab affairs.”

The revelation would be damning to the George H.W. Bush Administration and are doubly shameful when one considers that, just a week after Glaspie’s reassurances the US embarked on a policy of hostility and sanctions that continues to this day, has cost over a million lives and still has 50,000 US troops inside Iraq.

...It is not, then, some mythical enemy that these documents were classified to keep in the dark, but the American public itself, which would never accept these despicable policies were they aware of them. From both Bush Administrations to the Clinton and Obama Administrations, the policy was designed to deceive the American public, and the bipartisan outrage against WikiLeaks is the natural reaction to having been caught out in their lies. The jig is up, and the calls for censorship, prosecution, even execution reflects the level of embarrassment one might be expected to feel at the revelation to the American public that these administrations carried out a decades-long campaign of mass murder against the Iraqi people entirely on the basis of diplomatic ambiguity by one ambassador over 20 years ago. 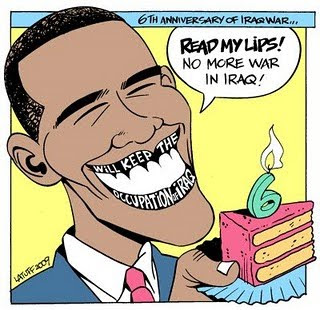 This cartoon is by Brazilian Carlos Latuff. The cake will have an 8 on it in March, 20011.
Posted by CarolMooreReport at 11:59 PM