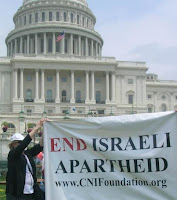 Philip Giraldi, the new Executive Direct for the Council for the National Interest, writes about Condoleeza Rice's recent visit to President Obama at Antiwar.com:

The Obama Administration foreign policy is virtually indistinguishable from that of George W. Bush, whose heavy handed form of internationalism combined with regime change has brought calamity to the United States. Presumably Obama and Rice were able to congratulate each other on their ability to unite Republicans and Democrats in supporting a seamless vision of the world as it might be if only those poor heathen devils out there would learn to behave. Andrew Bacevich has described the foreign policy consensus that has ruled the United States since the Second World War as a sacred trinity consisting of global military presence, a military capable of projecting power worldwide, and a willingness to intervene anywhere in the world for any reason secure in the belief that Washington is a force for good. These policies have been supported by both major parties and have now led to something approaching war without end as new adversaries are identified and confronted.

Standard stuff for peaceniks and libertarians. As is the call for "Nuremberg" type trials. But it has to be said over and over again til we make it happen. More excerpts from Giraldi.

Those who expect the government to serve the people should be particularly appalled at the revolving door of self-serving statists who proliferate throughout the system, men and women who have never had a genuine job in their lives but who scurry off to their law firms, lobbying offices, think tanks, and universities before returning at a higher level to the government bringing ruin with them.

Seven years ago a major war crime was committed when Iraq was attacked yet no one has been punished, nor has anyone even been seriously challenged on the steps taken that led up to war. The United States bombed and then invaded a country that posed no threat and that had no ability in any event to strike against Americans or American targets. In 1946, the judges at the Nuremberg Trials called the initiation of a war of aggression the ultimate war crime because it inevitably unleashed so many other evils. Ten leading Nazis were executed at Nuremberg and ninety-three Japanese officials at similar trials staged in Asia. In spite of the fact that a majority of Republicans now considers the Iraq war to have been a "mistake," a view certainly shared by most Democrats and the public, no American government official was even fired as a consequence.

If one were to ask who were the potential war criminals in the Bush Administration the list would certainly include Rice. Giraldi also lists and describes the crimes and comfy rewards for the crimes of: CIA Director George Tenet, Vice President Dick Cheney, his colleague Scooter Libby, Bush Deputy Secretary of Defense Paul Wolfowitz and his chief deputy at the Pentagon- Doug Feith,

No one is punished or even tarnished by his or her role. On the contrary, all are, in fact, richly rewarded for their presumed dedication to their country. One can well presume that the old saw about every good deed being rewarded has been turned on its head in the US government, with only those guilty of crimes against humanity being considered for promotion. Can there be any wonder why ambitious people who are ethically challenged flock to start wars and torture for Uncle Sam? They know they will never be held accountable for anything they do and will reap the financial rewards that they think they deserve. Until that culture is eradicated by something like a Nuremberg trial demonstrating that no one is above the law the United States will continue to be a place that the rest of the world quite rightly regards as preaching respect for rules and values while rewarding just the opposite.

This image from the Nuremberg Trials. Others here at WikiCommons. 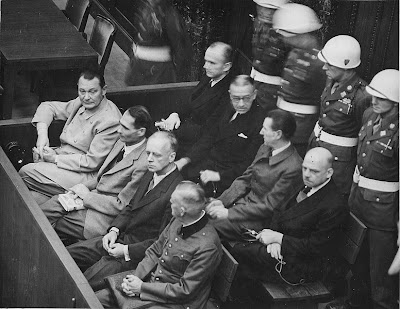 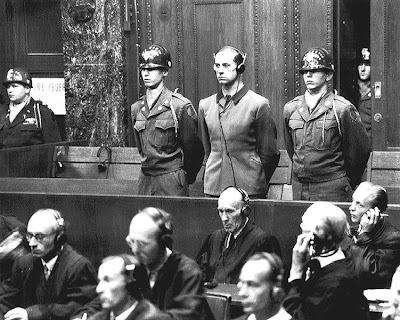 Posted by CarolMooreReport at 8:39 AM