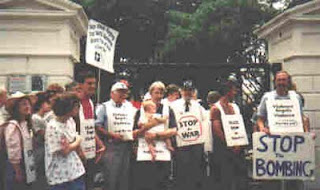 Same group of protesters during Clinton's bombing of Serbia in 1999
Sure, it was only the usual suspects protesting in front of the White House complaining about Iraq and Afghanistan, with no mention of the coming holocaust against Iran, but it was a protest, including civil disobedience sit downs and arrests, against Obama's continuation of most of Bush's pro-war policies. (Unfortunately, some tried to turn off most Americans by chanting for socialized medicine!) Dozens were arrested, including Cindy Sheehan.

We moved down the street and the truck came too. But we made a lot more noise. Prisoners in orange from Witness Against Torture chained themselves to the White House fence. So did Cindy Sheehan whose son died in Iraq. Veterans for Peace displayed US, Afghan, and Iraqi coffins and read the names of the dead and shouted: "Mourn the dead! Heal the wounded! End the wars!" The National Campaign for Nonviolent Resistance, the World Can't Wait, and lots of other groups joined in. Many of us donned black shirts, white placards with the names of dead troops or civilians, and white masks: the March of the Dead. We marched on the sidewalk in front of the White House in silence.

Then the police horses came at us. The police tried to drive us into the street with their horses, but we lay down on the sidewalk, and they didn't trample us. Instead they put police tape around a huge area, moved everyone else out of it, gave three warnings, and began arresting people. We lay on the sidewalk for approximately two hours, rode with lights and sirens blaring in an escorted caravan of vans and buses to the jail, and were out within an hour with tickets to pay $100 fines or challenge in court. The crime? Exercising free speech in a group of more than 25 people. Seriously.

Plus Swanson includes text of a Peace Action Press release: Twenty-three non-violent peace activists calling for an end to the US war in Afghanistan were violently pushed and dragged away from a White House gate by Secret Service officers this afternoon...After a non-violent “die-in” at the White House gate, the peace activists waited for over three hours while various police departments, including the Washington, DC Metro Police, Park Police and Secret Service, gave conflicting stories about whether the activists would be arrested or not, the group’s request to meet with someone from the Administration having been summarily rebuffed by White House guards. Suddenly, with no warning and with dozens of other police officers watching, a group of about a dozen Secret Service officers swooped in to push and drag the protesters, who included a number of retirees, away from the White House gate and outside a police perimeter that had been established in the normally public area in front of the White House....“Clearly, the Obama Administration, which has increased the violence in Afghanistan with its escalation of troops earlier this year, would rather have Secret Service thugs rough up peace activists than to engage in a dialogue with us about Afghanistan,” said [ Kevin Martin, Executive Director of Peace ActionMartin. Paul Kawika Martin (no relation), Peace Action’s Policy Director, had just returned from a citizens’ peacemaker delegation to Afghanistan organized by the peace group Code Pink. “But we will not be deterred, and the American people have turned decidedly against this war. We call on Obama to meet with us to discuss Afghanistan and apologize for the brutality of the White House police force, and to begin bringing US troops home so the people of Afghanistan can resolve their country’s problems.”
Posted by CarolMooreReport at 12:51 PM

What you really want is restoration of the "rule of law" which is:

b) Sanction (and fully compensate victims) those who disobey: