This article zapped home to me today a concept a few of us bantered about on Code Pink's women's day September 20 at Camp Democracy - how the peace movement and especially the women's movement has to be more and more focused on exposing male bad behavior, political and even personal.

.
Much as many men will throw up the examples of women like Margaret Thatcher or Hillary Clinton to "prove" that ALL women can be as bad as SOME men... it's still true that males have created and defend our most evil institutions of death and destruction and mostly control and staff them.
.
Similarly, men have a higher rate of committing the most obnoxious personal acts, from using or threatening violence to settle interpersonal disputes, to abusing women and children, to cheating on women with other women - or men, to drinking/drugging/gambling/etc., mostly to anesthesize the pain of having to excuse all this bad behavior in themselves and other males.
.
Women certainly engage in our share of bad behaviors - the most important of which, to me, being EXCUSING and COVERING UP male bad behavior, politically and personally.
.
Obviously the woman soldier below committed suicide rather than fight to expose the horrible torture techniques she witnessed. Her death is a symbol of the deaths all women die in wars because so many of us will not expose and fight bad male behavior, personal and political.
.
EXCERPT: Revealed: U.S. Soldier Killed Herselft After Objecting to Interrogation Techniques by Greg Mitchell (November 01, 2006)
.
...Now we learn that one of the first female soldiers killed in Iraq died by her own hand after objecting to interrogation techniques used on prisoners.
.
She was Army specialist Alyssa Peterson, 27, a Flagstaff, Az., native serving with C Company, 311th Military Intelligence BN, 101st Airborne. Peterson was an Arabic-speaking interrogator assigned to the prison at our air base in troubled Tal-Afar in northwestern Iraq. According to official records, she died on Sept. 15, 2003, from a “non-hostile weapons discharge.” ...
.
...When the documents of the official investigation of her death arrived, they contained bombshell revelations. Here’s what the Flagstaff public radio station, KNAU, where Elston now works, reported yesterday: Peterson objected to the interrogation techniques used on prisoners. She refused to participate after only two nights working in the unit known as the cage. Army spokespersons for her unit have refused to describe the interrogation techniques Alyssa objected to. They say all records of those techniques have now been destroyed. [See link for remainder of article.]
. 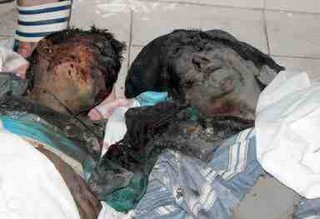 At left a photo of a woman and child killed by bad Israeli male behavior in Lebanon, Summer of 2006.
.
For a more positive spin on all this see my article Woman v. the Nation State.

Posted by CarolMooreReport at 12:53 PM