On August 28 John Mearsheimer, a political science professor at the University of Chicago and Stephen Walt, a political science professor at Harvard's Kennedy School of Government, appeared at a forum at Washington's national press club sponsored by the Council of American-Islamic Relations, the country's largest Muslim organization. The professors, of course, are the authors of the controversial paper "The Israel Lobby and U.S. Foreign Policy." Our local DC Antiwar Network sponsored a forum on it this spring, with video available.
.
I attended the event and have put up a YouTube 10 minute highlights video. Do a YouTube search to find whole C-SPAN presentation someone put.
.
For balanced reporting see the Washington Times and the widely distributed Chicago Tribune article. Click here for the Dana Milbank Washington Post smear piece. And see Justin Raimondo's response to it.
.
Milbank's smear is of particular interest to me because Milbank twice mentions the button I produced "Walt & Mearsheimer Rock. Fight the Israel Lobby." I gave one to both professors Walt and Mearsheimer after the event, not noticing until later that the snide Milbank was lurking around the periphery. Milbank infers the button is "evidence" the professors are anti-Semites. (I should have worn the t-shirt with the same slogan which I make available with other relevant ones at http://cafepress.com/israellobby)
.
Below is the letter to the editor I sent. Coincidentally, today the DC Antiwar Network, with which I organize, is protesting the Washington Post for its pro-war editorial content.
.
Below is my letter to the Washington Post editor. I'll report if they publish it.
.
In his August 29 article "Pronouncing Blame on the Israel Lobby" Dana Milbank reports that "Blurring the line between academics and activism, they [Professors Walt and Mearsheimer] accepted a button proclaiming 'Fight the Israel Lobby'." At the very end of the article Milbank mentions the full text of the button: "Walt & Mearsheimer Rock. Fight the Israel Lobby." and that Mearsheimer said, "beaming": "I like it."
.
First, don't the professors have the right to know, and even get a laugh out of, how political activists and/or entrepreneurs are using their work? Second, if Mr. Milbank wants to take on an academic who engages in "activism," he might start with Harvard law professor Alan Dershowitz, author of "The Case for Israel," whose advocacy for Israel is legendary, including frequent appearances on CNN and Fox News and OpEds in the Washington Post. Perhaps Mr. Milbank should enlighten us and the thousands of activist professors out there as to the proper role of academics in politics? Finally, as the designer and producer of the button who shared it with the professors, I believe all Americans have the right to politically "fight" or "battle" any lobby or interest group they disagree with, as long as they remain nonviolent. Evidently, Dana Milbank does not agree.
.
CAROL MOORE
http://radicalbuttons.com 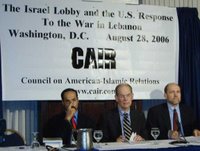 Posted by CarolMooreReport at 2:21 PM

Nice blog. Yours is a bit more developed than mine. My blog is only 3 weeks old but I've gotten almost 800 hits and I've been interviewed by a Brazillian blog http://tomasestradapalma4.blogspot.com/ because they saw mine. See ya!